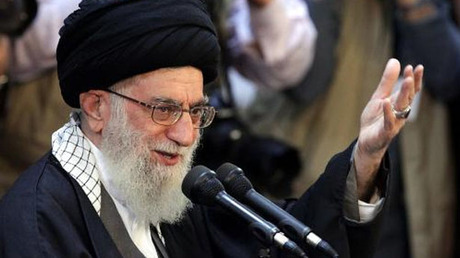 The statement confirmed that Maliki had lost the crucial backing of fellow Shiite leaders and politicians in Tehran, making it much harder to credibly fight on and remain head of government in Baghdad.

"We congratulate Haidar al-Abadi on his nomination as prime minister, for him personally and for religious dignitaries, the Iraqi population and its political groups," Shamkhani said, according to the official IRNA news agency.

Shamkhani had earlier been quoted as saying that Iran backed the legal process which led to Maliki being replaced, following the nomination of Abadi as premier.

But congratulating Abadi was a step further and signaled that Tehran was no longer willing to fight in Maliki's corner.

"The framework provided by the Iraqi constitution stipulates that the prime minister has been chosen by the majority group in the parliament," Shamkhani said in the Iranian capital.

Iran was influential in ensuring that Maliki retained the post of prime minister and served a second term following Iraq's inconclusive general election in 2010.

Although he won the largest number of seats in this year's April elections, the country's politics have been overshadowed by a jihadist surge in the north, which he has failed to quell.

On Monday, Iraq's President Fuad Masum tasked Abadi, who was deputy speaker in parliament, with forming a new government in a move angrily denounced by Maliki who wanted a third term.

Iran's Shamkhani called on "all groups and coalitions in Iraq to protect the national interest," taking into account the need to "deal with external threats".

Iran has expressed support for Maliki throughout the battle against Islamic State militants, but always said it would back the Baghdad parliament's choice of prime minister.

The calls for unity have long been interpreted as indicating that key figures in Tehran thought Maliki had failed to keep a handle on Iraq's delicate religious balance of Shiites, Sunnis, Kurds and other sects.

Long accused of running a sectarian government, Maliki may also have lost Tehran's support because his military forces wilted in the face of then relatively lightly-armed IS militants months ago.

As border nations with deep religious and political ties, Iran moved to help Maliki by sending military advisers to Baghdad within days of the jihadist push that saw the Iraqi army collapse when many units opted to put down their weapons and desert rather than stand and fight.

More than two months after its initial surge, IS, which boasts of its desire to kill Shiites, still controls large parts of Iraq, including areas close to the Iranian border.