Al-Rahi: Officials Should Make Sacrifices Like the Army and Elect President 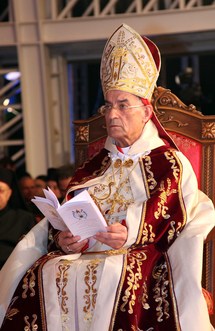 Maronite Patriarch Beshara al-Rahi declared on Friday that the army alone protects Lebanon against challenges, hailing its recent sacrifices that “helped defeat the Islamic State of Iraq and the Levant and other extremist groups.”

He added: “We hope politicians would follow the example of the army and make sacrifices to elect a new president.”

He made his remarks during a mass held in honor of the army martyrs on the occasion of the Assumption of the Virgin Mary.

“We salute Army chief General Jean Qahwaji, the soldiers, and security forces, and hope for the safe return of the captives” held by Islamist gunmen, al-Rahi said.

He also thanked international initiatives aimed at supporting the army.

He made his comment in reference to Saudi Arabia's grant of one billion dollars to the army aimed at helping it counter terrorism.

“Just as the army rose to the challenge of combating extremists, we hope that officials would have risen to the occasion, exercised their constitutional duties, and elected a president,” al-Rahi stressed during the mass held at his summer residence in al-Diman.

“We hope that politicians will in turn back the army and defend it and the security forces in recognition of their sacrifices,” continued the patriarch.

Commenting on the persecution of Christians in the region by the Islamic State jihadist group, al-Rahi prayed that world powers and organizations would take the necessary action to achieve peace in the region.

Clashes broke out on August 2 between the army and Islamist gunmen in the northeastern border town of Arsal in wake of the arrest of a prominent al-Nusra Front member Imad Jomaa.

Several soldiers were killed and wounded in the unrest that ended with a ceasefire on August 7.

The gunmen withdrew from the town, abducting a number of soldiers and security forces members.

Dream on Patriarch! This Lebanese political class make self sacrifice for the good of the nation?? The Lebanese Maronites are showing themselves to be less than parochial in their world view. They show themselves not to be fit for national leadership. The selfishness is beyond rampant. The need to outdo one another even to the point of self destruction seems to be a compulsive thing among them.

So Your Beatitude, know your flock. This is what they have become. Do not expect nobility, self sacrifice, or altruism, even to save the nation from a class of people who have been raised in a culture where they are taught from the start that they are exceptional, better than others, and within the confessional group, each one thinks himself or herself better than the one sitting next to them in the church.

And I say this as a Maronite myself. Our people have fallen to a terrible state and if they do not wake up soon, the rest of the country will find it necessary to abandon the idea of tying up the Presidency with a member of the Maronite Catholic confessional group which is proving itself unfit for service.

Religion should be private issue and not in politics, no doubt this will occur sometime in the future , this is the only remedy for Lebanon.

Some are planning for the void of all the institutions. Now the presidency. Next will be the Parliament. Then they will resign from the Government to reach the total void.
With the total void they will have all possibilities to direct and command the country.

clown senile aoun will make no sacrifice to reach the presidency. Remember he was so happy of himself in 89 when he was declaring that he is President et 6 ministers. This senile person has led the christian and lebanese to abyses of desperation and poverty.

And how exactly does the petite generale maintain his standard of living FT? Rabieh, the house that Iran built and now he's got the son in law down in Riyadh begging for some of KSA's money too. When will you admit that your demigod Aoun is just another prostitute like the rest of the Lebanese political class?