Building Evacuated in Tripoli over Fears of its Collapse 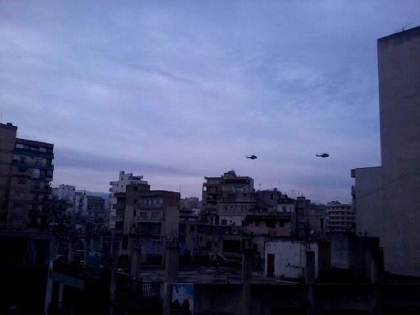 A building was evacuated in the northern city of Tripoli overnight after its residents fears that it may collapse, reported the National News Agency on Sunday.

It said that the residents of the ten-storey al-Mohajerin building evacuated it at around 2:00 a.m. following claims that it may collapse.

Security forces soon arrived at the scene to assist them.

Voice of Lebanon radio (93.3) had stated earlier that the inhabitants left the building after feeling it shake.

Some of them spent the night outside, while others opted to return to their homes.

Later on Sunday, engineers inspected the structure to determine whether it indeed is susceptible to collapse.

The refugee camp across the road are building tunnels preparing a future war with Israel.

actually there are building controls on new ones. On old ones nothing is done especially from the owners as most of the time they are getting nothing from the rents. Building are not maintained, concrete falls apart with time due to carbonation, steel structured gets rusted and the structure of the buildings collapses. This is what happened with the Fassouh building, and the gal el dib bridge. There are hundreds of building in our cities that should declared inhabitable. The technical services of the municipalities, although they are there and staffed with competent engineers, are doing not much about it as corruption in the main cities, especially Beirut has reached unprecedented levels.