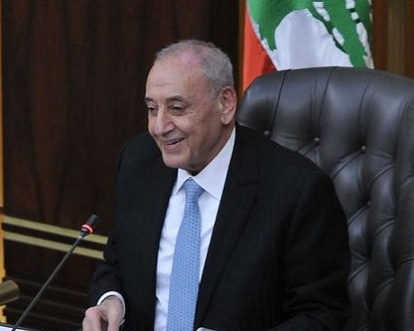 Speaker Nabih Berri has stressed that it was up to Christian leaders to agree to resolve the presidential deadlock, saying 87% of Muslim lawmakers were attending parliamentary sessions.

Berri denied that holding the presidential elections needed a Sunni-Shiite dialogue, saying “the problem is not with Muslims.”

Around 95 percent of Sunni, 98 percent of Druze and 50 percent of Shiite lawmakers are attending the sessions aimed at electing a president, he said.

Meaning, around 87 percent of Muslims – a number far bigger than the attendance of Christian MPs - are not boycotting the sessions, Berri said.

“I am saying this for patriotic reasons and not from confessional bases,” he added.

His remarks were published in newspapers that hit the newsstands on Monday.

“We have gone through difficult phases before. But as far as I know, this is the first time that the Lebanese could make their own decisions,” he said.

Berri lamented that the Lebanese haven't so far taken the opportunity to resolve their problems, saying however that they still had time to unite.

Lebanon has been without a head of state since May 25 when President Michel Suleiman's six-year term ended amid the failure of rival MPs to agree on a consensus candidate.

Last week, Berri postponed a 10th electoral round to September 2 after only 55 MPs attended the session.

The Constitution states that two-thirds of parliament's 128 members should be present to have a quorum.

Since a century the political tension of Lebanon did not change , today's ( religious ) problems were also 100 years ago.In retrospect, newspapers of decades ago were talking and analysing same topics as today , Ironically, by same family names but different first name. A change will occur when a substantial majority of the population will realise that all Lebanese should have equal rights , and that jobs allocation based on religious background is discrimination .Being discriminated will lead to less loyalty and vulnerability to manipulation by hostile foreign interests

Stop talking Christians ,Muslims, Druz......it is a talent to become old and not being Mature.

proof FT? oh i forgot, you never have any. Like never. Not once. Not a single citation for a fact.

convenien. excuses excuses xcuses, and still no proof. and kitty, your buddy down here FT is the king of: "proof? no? tdabdab"

apologies Mr Roar. didn't know your problem with me was a grammatical one.

Just replace proof with evidence in my previous post then. Or is there anything else you want to divert the discussion towards?

yalla ft make yourself look stupider still. now insult me on something else without backing your claims.

FT and Roar are true Lebanese, Bashaar has become their icon and the LF are now the enemy. Why don't you guys convert to Shiia, maybe we would be able understand where your coming from.
Attack Geagea to defend Bassil, good one boys.

Bashar is your friend, spare me the outside Lebanon part. You just love how he kills his own people, how he's a dictator, how his father viewed Lebanon as part of Syria, how he was given the "Lebanon file" by his father in the late 90s, how he bombs Lebanese territory (of course Bassil doesn't file complaints to the UN), how he uses chemical weapons on his own people. Yeah, what a friend to have Binary.

As long as Geagea stops selling out to Syria? Is that not exactly what Aoun is doing today? Allying with Hezbollah is selling out to Syria. Wasn't it Aoun who said some shadowy group like Fatah al-Islam blew up Hariri? Isn't it Aoun who said when he becomes president he won't resolve the issue of Hezbollah's arms? Seems like he took quite a few paydays from your friend Bashar. Ahhh that's why he's your friend, because he pays your idol.

i thought you didnt have any POWs in syria :)

Binary, you always try arguing with me by bringing up what Aoun did during the civil war. What he did during the civil war has nothing to do with what he's doing today. Like I said a million times I was glad when Aoun fought Syria. So stop trying to change the subject. We're talking about what Aoun is doing in 2014, not 1990. And stop trying to think you're smarter than me. You're an idiot simply because you defend a politician. Taking sides impedes objectivity and intelligence. I don't care what electoral law Geagea supported and got yanked by KSA, nor do I care who attended Bassel Assad's funeral. All of the electoral law proposals by all the politicians are wrong.

I'm not an Ouwwetji with smokescreen answers. I directly you and you always change the subject (you never responded to my comment about Bashar being your friend). You chose to ignore it and reply to the one about Aoun then changed the subject by defending what he did 25 years ago (as if I was against it) which is irrelevant to this discussion. I know what Michel Aoun did in 1990, and I know what he's doing in 2014. His ethical past does not exonerate him from what he's doing today Binary. That's what you fail to see.

I directly answer* you

nickjames, i will save you some trouble here. FT has been repeating the exact same things for a few years now on naharnet. His position only changes when aoun's changes.

I have commented on this forum on and off for a couple of years as well but recently stopped when i realized this will never go anyway else and FT and his ilk will relentlessly repeat the FPM's stance on that day.

Not to say M14 supporters here are any better. they do the exacrt same thing. Now imagine years and years of people screaming their opinion at others all day every day without even considering listening to what the other has to say, and what do you get? Lebanon, or a virtual Lebanon represented roughly by the naharnet forum.

It may be true what you say about Geagea. Who knows how you get that kind of money's term being in jail. I can tell you that LF has fundraisers all over the world. Most of it may have come elsewhere but we have no proof besides it makes sense to ask where it came from. I know these people well. I think the Saudi ties are more recent and not there 20 years ago. He definitely did not sell to Syria but others definitely did in an attempt to stop the palestininain advance. Don't we all know this?

Even if all that you say is true about Geagea you still are not taking responsibility for the BS Berri is saying about a quorum when it is his allies causing the disconnect. Look, if you don't like it, nominate your candidate and let the people decide. You can't just not participate. It's not like Christians approve of Berri being your leader.

Zahle1, very valid post, sadly, in Lebanon, people tend to approve of the misdeeds their beloved politicians/leaders do while point fingers at those who they dislike. Above all, most of it is based on hearsay without a method of authentication.

"M8 conduct debates based on facts" Roar I swear if the technology existed I'd jump through your computer and slap you so hard you'd wish you were never Lebanese. Proof and evidence are needed to explain why Aoun is boycotting the election. He's boycotting it because he wants the thing handed to him on a silver platter and that if there's the slightest chance he could lose to another candidate he's "not running" despite the fact that Nasrallah brilliantly said "I have my guy, what are we waiting for?" It's the people like you who are the dregs of Lebanese society who follow leaders blindly and justify their agendas as long ad I'm not imposing my Western agenda. It sickens me to see on the article that you drink scotch, you're not worthy of it.

Proof and evidence are not* needed

nickjames, roar is basically a teenager who has never set foot in lebanon and lives in australia, probably with his parents who were with aoun during the war.

so he is just regurgitating what he ehars from his daddy and uncle and wants to play tough guy in the internet.

did i say he doesnt even live in lebanon? oh yeh. all that high and mighty attitude and the dude is not even lebanese (except by passport)

Titan you don't have to be born in Lebanon to know politics. All you have to do is read Naharnet and the forum.

he cant titan. he has to do his homework first

i wonder if he asks gebran men ayn lahou haza?

Great, then we should elect whoever runs for the post.
It seems that the Maronite do not want it as their role has been hijacked.

Let them elect. The candidates whom they feel is qualified ?.?
Any one as in lebanon...there are many overqualified but they are prisoners of narrow minded political immaturity and games

no no karim, roar and ft want real evidence. this is just taken out of context!!! aoun is standing in nejmeh square every day but they wont let him in. you know, like how they kidnapped him to the french embassy and didnt let him out, put him on a plane, tied his seatbelt and took him to france where they force fed him steaks for 15 years

rudy you are so clever. How do you do ? btw, is rudy your first name ? just wondering (-:

And yes rudy is my first name

rudy you are so clever. How do you do ? btw, is rudy your first name ? just wondering (-:

flamer cut it out stop patting yourself on the back, you never ever posted anything nearing proven facts or figures, stop emulating your hero be a man for once, and why are you now posting as different Guests? are you too lazy to keep opening new accounts with new nicknames? just wondering (-:

your Arabic keyboard gives emoticon a reversed like this (-: or this (:

that's beside the point, geagea was never a civil servant so ft asking about me3rab or the anything related to his alleged wealth is just his way to deflect from aoun a mere general not very well paid after he started two wars and caused a third one just to become preident and who ran way a millionaireor bassil who was basically penniless before he became minister now not so penniless, both became millionaires when on taxpayer dime.

The question than begs the same off all politicians; although I do not pretend to know what is the financial status of Lebanese politicians since it is not mandated to reveal their personal wealth to hold public office. How could Nassrallah afford a military and a home to live and all the financing that goes behind the scene. Berry, Aoun, Jumblatt, etc.... Why question the finances of one that you happen to dislike but never question the finances of all. I believe you will be shocked to learn that many politicians in Lebanon who never held a true job, have amassed a giant sum of cash.

Thanks for the web site articles