Jumblat Meets Franjieh in Bnashii: We Have No Solutions on Presidential Impasse 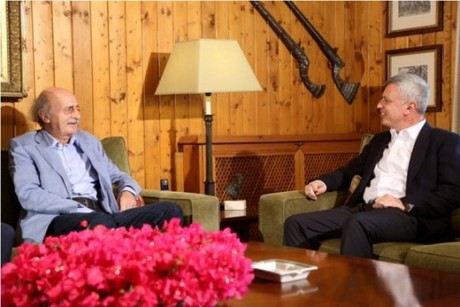 Progressive Socialist Party chief Walid Jumblat met with Marada Movement leader Suleiman Franjieh in Bnashii on Monday, announcing that he has no solutions to end the presidential vacuum.

"I said I will hold talks (with political leaders) and I will carry on with these talks but it is not me who has the solution,” Jumblat said after meeting with Franjieh.

"And I have chosen this place (Franjieh's house in Bnashii) after meeting with (Free Patriotic Movement leader Michel) Aoun to renew relations despite some differences in viewpoints,” he added.

He continued: “I visited this house years ago and we have a historical relation with the Franjieh family and with Suleiman (Franjieh). Despite some political differences, and I don't call them disputes, we have common grounds which are about preserving Lebanon's sovereignty, independence and stability.”

The Marada Movement leader, meanwhile, described the meeting as “friendly.”

"As Jumblat said, we agree on some things and we disagree on others. But we believe in dialogue and we have the same concerns over Lebanon,” he said.

"Everything Jumblat is doing stems from his concern over Lebanon and our existence as minorities. This is a common concern,” he went on to say.

He reiterated that both leaders “do not have a solution,” adding that dialogue and communication “are necessary regardless of how much conditions deteriorate.”

"We need to continue talking with one another,” Franjieh stressed.

Jumblat's Monday visit to Bnashii comes as part of his efforts to convince the rival leaders to elect a compromise president.

Al-Akhbar newspaper said that Monday's meeting was preceded by talks between Jumblat's son Taymour and Tony Franjieh, the son of the Marada chief, at the house of a member of the displaced fund, in Ehden.

The meeting was attended by several current and former cabinet ministers and lawmakers, and Marada and PSP officials, al-Akhbar added.

Jumblat has held onto the candidacy of Aley MP Henri Helou, a member of his parliamentary bloc, saying Lebanon needed a centrist compromise candidate for the presidency.

Lebanon has been without a president since May 25 when Michel Suleiman's six-year term ended amid a failure by parliament to elect a successor over differences on a compromise candidate.

The March 14 alliance has backed the candidacy of Geagea. But the Hizbullah-led March 8 camp has not officially announced its support for Aoun, who has claimed that he would run for the presidency only if there was consensus on him.

While the majority of the population is jobless and live in poverty, these people keep talking and get richer.....and sowing hatred among the population groups.

He reiterated that both leaders “do not have a solution,..." ............. YET you idiots continue to rule and those who are much more qualified will never be able to replace you because of your MAFAI-STYLE operations have enslaved a whole population

roro, do you only post as @wolf during weekends?