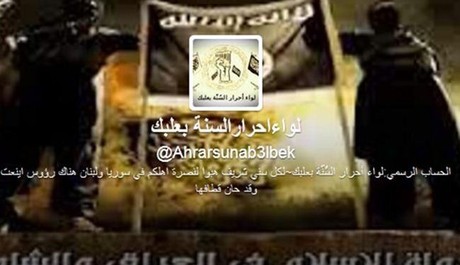 The operator of the Free Sunnis of Baalbek Brigades Twitter account has been referred to the Military Court, reported the National News Agency on Monday.

It said that the case of Hussein al-Hussein was referred to State Commissioner to the Military Court Judge Saqr Saqr by General Prosecutor Judge Samir Hammoud.

Hussein, 19, was arrested on Thursday by the Internal Security Forces Intelligence Bureau.

The Brigade has claimed responsibility for several rocket and bomb attacks inside Lebanon, the last of which were the suicide blasts in Dahr al-Baydar and Raouche's Duroy Hotel.

It has repeatedly slammed the military institution as the “Crusader Army” and it vowed to task gunmen to attack churches in Lebanon and in the eastern Bekaa valley in particular.

It has repeatedly slammed the military institution as the “Crusader Army”

and repeatedly slamming the military institution as the “Crusader Army”

this kid is on the payroll of Ali Mamlouk. One of Assad projects to screw lebanon up.

If the parent called HA, then HA must be his employer.

If I recall Ahrar al-Sunna Baalbek brigade (AASBB) claimed responsibility via Twitter for bombings and assassinations including the murder of HA commander Laqqis and suicide bombing in Nabi Uthman. No one counter claimed.
The AASBB also claimed to be aligned with the Qaeda's Abdullah Azzam Brigades.
Humm, why didn't Azzam Brigades deny that link, is it true?
Nasrallah said in an interview on TV "..Azzam Brigades isn't a fictitious name. This group exists. It has its leadership and I am convinced it is linked to Saudi intelligence. Saudi Arabia is the one who runs these kinds of groups in several places in the world."
But wait isn't the operator of the AASBB Twitter account a member of Hassan's party and was trying to sow sectarian hate?
This whole charade reminds me of Bashar's Samaha/Mamlouk plot to start sectarian strife by blowing up religious targets and blaming Qaeda?
Also weren't the two mosques in Tripoli blown up by Bashar's agents.
Hassan you got some 'splainin' to do!

Still waiting for you to give us evidence of hussein el hussein being a sunni.

ya'll better watch out for the Free Maronites of Bab Al Tabbaneh.
they'll make the Free Sunnis of Baalbek look like angels.