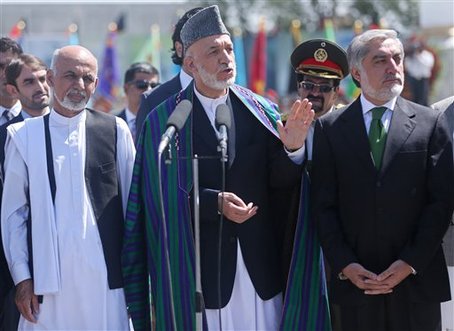 "The Afghan government is totally ready for the inauguration ceremony of the new president on the date of September 2," the presidential palace said in a statement.

The date would not change, according to the statement, which was issued following talks between Karzai and the head of the U.N. mission in Afghanistan Jan Kubis.

The new president was due to be inaugurated on August 2, in Afghanistan's first democratic transfer of power, but the government has been paralyzed for months after the first round of the presidential election failed to produce a clear winner and the second round of voting in June triggered allegations of massive fraud.

But neither candidate appears willing to back down, and the dispute looks set to break out again in the coming days when early results emerge from an anti-fraud audit of all eight million votes.

The audit has checked more than 60 percent of votes, and the next stage of invalidating fraudulent ballots will likely raise tensions between the candidates -- who are also meant to be in talks about a post-election unity government.

The United States had been pushing for the next president to be inaugurated before a NATO summit starting on September 4, which should sign off on follow-up support after the transatlantic alliance's combat mission in Afghanistan ends this year.

The political crisis would worsen sharply if either candidate pulls out of the audit or rejects its outcome, with possible angry street protests in Kabul by aggrieved supporters set to pose a major challenge to the national security forces.

The election deadlock has revived ethnic divisions that lay behind the 1990s civil war in Afghanistan.

Uncertainty has also shaken the fragile economy, which is dependent on falling aid funding as the 13-year international effort to develop Afghanistan winds down.