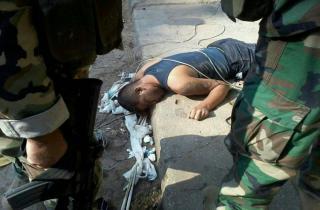 “Five people were injured when I. B. threw 3 hand grenades indiscriminately in al-Zahriyeh,” MTV reported.

Several vehicles were also damaged in the incident.

“At once, the army encircled a building in the al-Zahriyeh area to arrest the man who hurled the grenades,” Tripoli News Network said, identifying the assailant as Issa al-Baba.

However, state-run National News Agency later reported that the man jumped off the balcony of his 4th floor apartment in al-Zahriyeh as the army raided the house.

He was rushed to hospital with multiple fractures, according to the agency.

Josh where did u get ur info man seriously im not bashing u because i know the hassoun family are big in tripoli from abou samra and kojak is from the zahriyeh.....

he makes it up makhaleh, we saw him doing it over and over again

Friends, Lebanese, countrymen - let's pray that this man gets well soon so we can hang him.