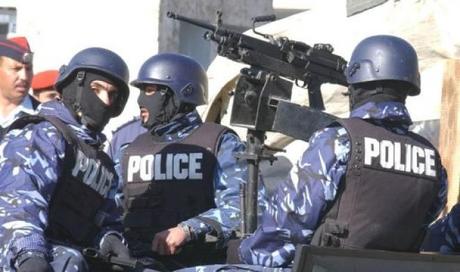 Jordanian military prosecutors on Monday charged eight suspects, including a Syrian fugitive, with plotting to attack U.S. soldiers and Israel's embassy in the kingdom and recruiting people to join Hizbullah.

"State security court prosecutors accused the eight men with plotting to carry out terrorist acts, including attacks against U.S. soldiers in 2006 and the Israeli embassy in Amman," a court official told Agence France Presse.

"The suspects, seven Jordanians and a Syrian fugitive, also recruited people to join Hizbullah," he said, adding that the group was arrested in May last year.

The official gave no further details, but said the suspects face life imprisonment if convicted.

In May, the military tribunal handed jail terms of between four and 20 years to 11 people it convicted of plotting to attack the U.S. embassy for al-Qaida in 2012.

"seven Jordanians and a Syrian fugitive"... not really the typical HA nationalities...

did you read the article before you commented? "The suspects, seven Jordanians and a Syrian fugitive, also recruited people to join Hizbullah,"
what are HA typical nationalities or you meant sect?

but you always maintained that HA has supporters and members from all sects or are you admitting finally that HA is a sectarian organization?

I see the fake accounts are in full force today, feel good about yourself?

Wait so we go fight zionist american occupation in iraq but we collaborate with them in syria?

i speak london very best! me and my southern brethern