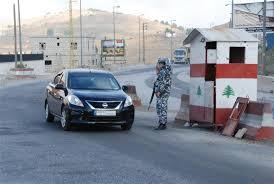 The Internal Security Forces on Monday announced the arrest of “one of the most dangerous fugitives” at the Dahr al-Baydar checkpoint in the Bekaa, noting that he was wanted on more than 130 arrest warrants.

In a statement, the ISF identified the man as M. J., saying he was apprehended on Sunday.

The 27-year-old Lebanese detainee was “wanted on 131 arrest warrants and summary judgments related to offenses punishable by death and multiple accounts of life imprisonment,” the ISF said.

The man had been charged with “murdering a soldier, attempting to murder soldiers, forming an armed gang, plotting abductions and kidnap at gunpoint, armed robbery and attacking a military post.”

The statement did not mention the locations of the aforementioned assaults.

The man is also accused of several blackmail and theft crimes and “the possession of arms and military apparel” in addition to “opening fire from an assault weapon, transporting arms and ammunition, forgery and intimidation.”

The dangerous fugitive's criminal record also contains “bribery and drug dealing,” according to the ISF statement.

My family and I were just mentioning that only a person like flamethrower would figure this one out. You are something another!

It's Mohammad Jaafar a drug baron and dealer who murdered a Lebanese soldier in Baalbek back in April 2009, good catch guys.

Lak MJ is Michael Jackson...he is still alive. He is alive, just as Elvis Presley is alive.

Ft has 15 different accounts and counting

It is either Michael Jordan or Michael Jackson, duhhh...

these comments dont help ur country LEBANON,if u are lebanese ,be patriot.full stop.