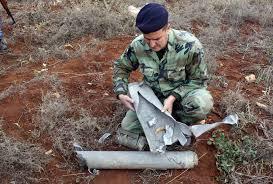 A rocked was fired on Monday evening from southern Lebanon towards Israel, as sirens wailed across northern Israeli settlements without any immediate reports of injuries.

"A rocket was fired from an area near (the southern) al-Jarmaq region in Wadi al-Litani towards Israel,” LBCI television reported in the evening.

"At least one rocket fired from Lebanon hit the Upper Galilee," a message on the military's official Twitter feed said.

Israel later fired retaliatory shells towards the area in southern Lebanon from which the rocket was launched at Israel.

Late on Saturday evening, a rocket fired from Lebanese territory hit northern Israel, the Israeli army said on the 47th day of a war against the Islamist movement Hamas in and around Gaza.

"The rocket that was fired from Lebanon hit the Upper Galilee," the army said in a statement.

No group has so far claimed responsibility for that rocket attack at Israel.

And on Sunday two rocket launchpads were found in the southern region of Tyre, from which the two rockets were fired.

UNIFIL Commander Major-General Luciano Portolano strongly condemned the rocket fire, describing it as a dangerous violation of U.N. Security Council Resolution 1701, which ended the 2006 war between Israel and Hizbullah.

In mid-July, at least nine rockets were fired from Lebanon at Israel, prompting Tel Aviv to retaliate with artillery fire.

Lebanese military officials had at the time said they believed the attacks were carried out by a small Palestinian group in an act of solidarity with Gazan militants.

Some idiot is trying to pull the tigers tail, in order to get them to retaliate, and once again blame Israel.

take off the cross off your avatar, this isn't the lasssa church.

Victims or not, if you shoot it will return on you 10 times more.
Better don't start. Contrary to Lebanon with armed terrorist groups walking around, free to do what they want, Israel has an army which will defend its citizen. If Lebanon wants peace and quiet, Israel will be ready to shake the Lebanese hand. If Lebanon prefers to warm up the border, it will be Lebanese people who will suffer. Don't start and keep border quiet.

"prompting Tel Aviv to retaliate with artillery fire." Really? Tel Aviv has an army now? Perhaps we need each city to have its own army, so when one attacks a sovereign country, the others can claim innocence. Just like what happens in Lebanon.

Wtf !!!! Are they all waiting for these phsycic to loose their mind and to start destroying Lebanon again like in 2006 ??? Better to stop this shit, we have enough garbage here, btw this nation have from 300 to 400 nukes bombs for yom el dinn !! So good luck my fellow lebanese

no worries peoples of south lebanon, nasrallah sent a private message of reassurance to the israelis with alexander bogdanov "we mean you no harm" the lebanese southern border in longer their theater of operation.

Druzes, Catholics, Orthodoxes, Sunnis, Shiites, Maronites...are the Pride of Lebanon !!! like it or not, you little terrorist (not to say another word...) will not re-write our long and fruitful Common History...