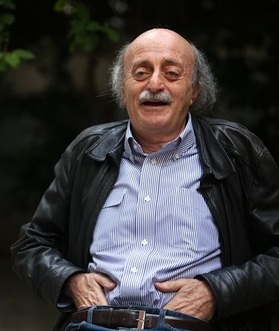 Al-Liwaa newspaper, published on Tuesday, said that the destination of Jumblat is unknown, despite rumors saying that he headed to the French capital Paris for talks with al-Mustaqbal chief Saad Hariri.

Jumblat kicked off recently a tour on Maronite leaders as part of his efforts to convince the rival leaders to elect a compromise president.

The majority of the March 8 alliance's MPs, including Aoun's parliamentary bloc, boycotted the sessions aimed at electing a head of state, causing lack of quorum.

This country is hijacked by incompetent people ,disconnected from the real world and the people, they are isolated in ivory towers surrounded by their private armies preaching outdated and expired visions.And the biggest joke is they are looking for solution while they are the cause of the Lebanese problems.

with great sorrow i think that kazan is right

So so true Kazan. We are governed by incompetence.

were you just banned flamethrower???? This must be your 150th screen name!

FT can you surprise us even once with something constructive? ur like a disc on repeat mode

His comments are for those with an acquired taste for BS

The keen eye reveals the conundrum of Mr Jumblat`s undisclosed destination as a Sun drenched vacation Paradise, the clue is in the picture he`s obviously pointing out his new Speedo

Seems Jumblatt is more concerned with the vacuum in the Presidency than the Maronites who are to fill it.