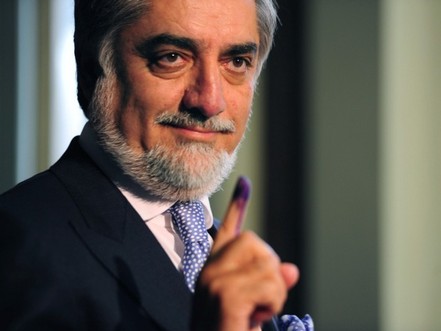 Afghan presidential candidate Abdullah Abdullah will reject the results of a U.N.-supervised audit of the election, his spokesman said Wednesday, tipping the country deeper into crisis just a week before the scheduled inauguration.

Fears grew of a violent backlash against the eventual result after Abdullah withdrew his observers from the audit earlier Wednesday in the latest twist of a dispute over allegations of massive fraud in the June 14 election.

The United Nations moved rapidly to try to save Afghanistan's first democratic transfer of power by asking Ashraf Ghani, the other presidential candidate, to also remove his observers from the vote-checking process.

The stand-off between Abdullah, a former anti-Taliban resistance fighter, and Ghani, an ex-World Bank economist, has threatened to revive ethnic unrest as U.S.-led NATO combat troops prepare to exit by the end of this year.

"We will be out of the process, and any kind of result from the process will not be acceptable for Dr Abdullah," Muslim Saadat, one of his spokesmen, told Agence France Presse after Abdullah's observers did not attend the audit on Wednesday.

Abdullah claims he was cheated out of victory in the 2009 presidential election against incumbent President Hamid Karzai, and says history is repeating itself via massive ballot-rigging in favor of Ghani, whose camp denies the charge.

Abdullah won the first-round election in April out of a field of eight candidates, but preliminary results from the June run-off showed that he was far behind Ghani.

"The audit must be seen to be even-handed by all Afghans... Dr Ghani's team has agreed to withdraw," Haysom told reporters.

The United States also stepped in on Wednesday, with special envoy Dan Feldman arriving in Kabul and holding talks with the candidates.

The U.S. is keen to keep alive a deal that it brokered in which the two rivals agreed to respect the audit's conclusions and to then form a national unity government.

The audit of all eight million votes was designed to strengthen the legitimacy of the next government.

But any street protests by aggrieved Abdullah supporters could set off a spiral of instability that the U.N. fears would revive the divisions of the 1990s civil war.

With both candidates claiming victory, Karzai has raised the stakes by insisting that his successor will be inaugurated next Tuesday.

"Because we don't want any problems to be created, and based on the U.N. request, our team decided to withdraw from the process too," said Ghani spokeswoman Azita Rafhat.

"We trust the U.N. and election commission, and whatever result that comes out of their audit is acceptable to us."

Furious allies of Abdullah have pushed him to form a "parallel government", while officials have denied reports that some current ministers planned to set up a "interim administration" to take power.

"Afghanistan faces enormous, formidable challenges... for which it requires not only a legitimate government, but one based on the broadest level of support across the country," said Haysom, who stressed the audit would continue.

Western nations, which have sent tens of thousands of troops and billions of dollars worth of aid to Afghanistan since 2001, still hope that a credible election will be a flagship legacy of progress made since the austere Taliban era.

US-led foreign troop numbers have declined from a peak of 150,000 in 2012 to just 44,300 now, with Afghan soldiers and police struggling to beat back new Taliban offensives in the south and east.

Karzai, who has been president since the Taliban regime was ousted, has stayed publicly neutral in the election dispute -- while warning that the impasse has badly damaged Afghanistan's fragile security and economy.

Karzai and the U.S. have been pushing for the next president to be inaugurated before a NATO summit starting on September 4, which should sign off on follow-up support after the coalition's combat mission ends this year.