Mashnouq Says Army Probing IS Beheading Claim, Does Not Rule Out Border Closure 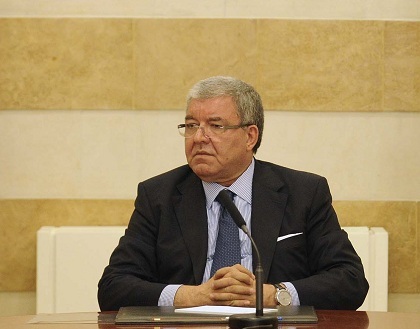 Interior Minister Nouhad al-Mashnouq has revealed that the Lebanese army formed a committee to investigate the jihadists' alleged beheading of a soldier who was taken captive in the northeastern border town of Arsal earlier this month.

Al-Mashnouq told local dailies published on Friday that the committee of experts is probing the images of what appears to be the beheading of the soldier.

An alleged Islamic State militant calling himself Abu Musaab Hafid al-Baghdadi posted on Thursday photos on his Twitter account that show him cutting off the head of a blindfolded man with a medium beard.

He identified the victim as “Ali al-Sayyed, an apostate soldier belonging to the army of the cross.”

Al-Sayyed and several other soldiers and members of the Internal Security Forces members were taken captive by IS and al-Nusra Front jihadists following deadly clashes with the army on August 2.

The militants withdrew from the town after a ceasefire was brokered by Muslim scholars but on Thursday they clashed with the army again.

The military said in a communique that the fighting erupted when an army vehicle with five soldiers on board was ambushed at around 11:00 am.

The army launched a counter-attack in which one of the soldiers was wounded while another went missing, it added.

Family members of several captives blocked on Friday roads in Akkar district, calling for their release.

In his remarks to the newspapers, al-Mashnouq did not rule out the closure of the Lebanese-Syrian border “if the situation threatens national security.”

He warned that any expansion of the Islamic State in Syria would lead to an unprecedented rise in the number of Syrian refugees in Lebanon.

He visited Free Patriotic Movement leader MP Michel Aoun to discuss with him the "dangerous situation" in Arsal.

The incidents there are a clear sign “there is a time bomb that could explode anytime,” he said.

The conditions in the border town top all other issues, al-Mashnouq added.

close the border and allow only HA to go through but never to come back. Let them die in Syria. May ISIL and HA and Assad battle it out till dooms day.

Rest assured, folks, that Lebanon doesn't need much to close the border with Syria shut. All it takes is a couple of overinflated buffoons from al-Mustaqbal of an equal or slightly larger size than aboulnawahed. Other than farts (no pun intended, farts 14 & co.), nothing will pass through them.

Mr Mashnouq, bakirrrr...thinkinggg!!! man wake up on which side of the pellow do u sleep..

All Syrian terrorists should be hanged..death..an eye for an eye..we should kill 100 of them for each of our soldiers.

Close the borders and send HA elite fighters with Army special units to exterminate this cancer of humanity.

elite? hahaha! Yeah, we say how elite they are;)))

Over all what is happening till now and since more than a years,still not threatening the lebanon!!!!!!!