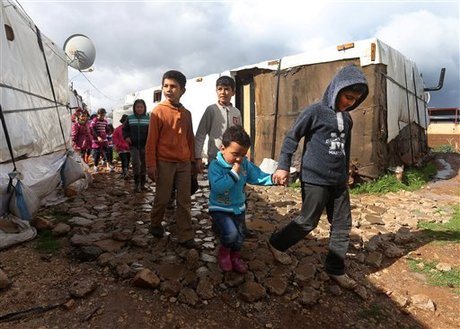 Interior Minister Nouhad al-Mashnouq reiterated warnings on Saturday that around 1.1 million Syrian refugees in Lebanon will be at risk if any security personnel taken hostage on the outskirts of the northeastern border town of Arsal was harmed.

The Islamist abductors “should be aware that they are putting the 1.1 million Syrian refugees currently in Lebanon at risk due to their actions and threats,” Mashnouq said in comments published in An Nahar newspaper.

“No one should presume that we will remain spectators if any Lebanese soldier or national was killed or slaughtered,” the minister cautioned.

Mashnouq's warnings come a day after a new videotape emerged for several kidnapped soldiers and policemen, calling on their parents to block roads and pressure the cabinet to release them in exchange for Islamist inmates held in Roumieh.

Two of the troops also remarked that their execution will take place in three days if the demands of their abductors were not met.

Jihadists from the the Islamic State of Iraq and the Levant and the Qaida-linked al-Nusra Front kidnapped several soldiers and policemen following fierce clashes that erupted on August 2 in Arsal.

“We will exert efforts to ensure the safe release of the kidnapped security personnel,” the Mustaqbal official said, pointing out that “several sides” are involved in the matter.

“Arsal is a permanent clash area that needs important political decision regarding the Syrian refugees and on means to deal with the security situation.”

Arsal lies 12 kilometers from the border with Syria and its inhabitants are overwhelmingly sympathetic to the Sunni-dominated uprising against Syrian President Bashar Assad's regime and is widely suspected of smuggling weapons and fighters across the border.

However, the residents of the Bekaa town were angered after jihadists from Syria attacked their town earlier in August.

No, Mashnouq is dedinitly not right and he should right now step back from office, igniting hate against mostly women and children, which are the majority of the syrian refugees! The abductors of the soldiers give a dam about the syrian refugees but you want the refugees to pay their price. It will be you who pays the price too, because then you will really have the war inside Lebanon! But Mashnouq obviously doesn´t care.

No, Mashnouq is not right! He ist igniting fire against refugees, in the majority women and children, and men who prefer looking after their families instead of getting killed in syria and have absolutly nothing to do with the abductions by extremists, which Mashnouq should be aware of! And you people will follow him and bring terror to these people and to yourselves! Mabrouk!

It does not matter anymore if refugees have no fault! So is the soldier or the policeman, their mothers and fathers, they also have no. Fault... why should we always handle things with a silk glove?
If they hurt a lebanEse after having them in our country, tax free, and no return whatsoever to our economy, then they would have to pay the price for what their fighters are doing. Yes, it is harsh but this is the only way you show everyone that lebanese soldiers and lebanEse lives are very important

Wrong targets now, wrong decision then.
First,
- the refugess should NEVER have been allowed in Lebanon. A better solution would have been to send them food and tents across the birder if yiu worry about them. Even better is to let their own damn government be responsible forntheir welfare.
Second
- ISIS doesnt care about them and Mashnouq's threats wont deter them... A better target is the kidnappers themselves, use the LAF to bomb the hell out of their positions then send maghaweer to rescue any surviving hostages.. If none survived, they werent going to anyway so at least let their deaths increase the respect and fear of our army and our nation by these criminals!

ISIL/ISIS?IS cares nothing about the refugees. They have helped create the refugee problem by fighting on the side of the Assad regime,at least until recently. Not sure why Al Nusra is lumped in with ISIS. They have been fighting each other at least since the beginning of the year and Al Nusra has been fighting the assad regiome. Who actually holds the Lebaneses soldiers? Threatening to attack innocent refugees is criminal. Thats a lot worse than threatening captured soldiers who knowing risk their lives when joining an Army.

Lebanon is not a state, it's a militia republic. No decent country on earth would threaten refugees like this.

Not all Syrian refugees are take iris but majority, if not all, of take iris are Syrian with families benefiting from the tolerance in Lebanon.
I approve with Mashnouq decision to single takfiris families (10 for one) among the refugees.
This is the only language they understand