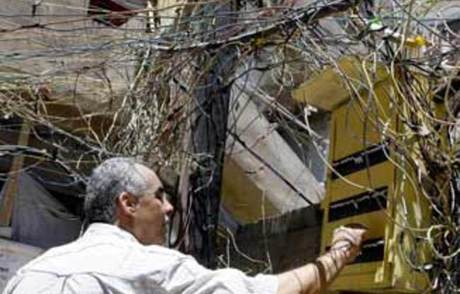 Electricite du Liban apologized to nationals for failing to work on the malfunctions in electricity feed as long as the abnormal situation at the company remains as it is, in hints to the strike of the company's contract workers.

“After security forces failed to ensure the safe entrance and exit of EDL employees into its headquarters... We are not responsible for the building until the obscure situation ends and things go back to normal,” EDL said in a statement.

Most of Lebanon plunged into darkness in the last two days as the rift between the EDL contract workers and management increased, threatening further electricity rationing.

“Work at the company will not be organized as long as (contract workers) are being selective in their behavior and as long as we need a permission by those who are occupying the HQ to enter it,” the statement added.

The company said in its statement that the endeavors of the contract workers remind of Lebanon's civil war that ended a quarter of a century ago when the country had no electricity.

The contract workers had opened the doors of the company's HQ in Beirut's Mar Mikhael earlier on Saturday to allow employees to enter and take the necessary equipment to fix the electricity malfunction, however, the employees didn't show up.

“Either all the gates are opened and employees starting with the general manager to the lowest ranking worker could enter with dignity... Or there's no value of any other endeavor and nationals will not be served.”

The statement pointed out that any initiative by the contract workers should be “complete and not selective so it would be fruitful.”

The company reiterated calls on the security forces and competent judiciary to apply the law and remove the “ongoing occupation.”

However, the contract workers slammed the EDL management, saying: “Accusing us of the electricity rationing problems are void arguments to cover up for its lousy policies.”

The workers have gone on an open-ended strike and on several occasions blocked roads and mainly the highway near the company’s HQ to push for the full-time employment of almost 2,000 of them.

But the rift increased when several workers erected tents at the EDL HQ and locked the gates to press the company to adopt their full-time employment.

The company's board of directors has claimed that a law, adopted by parliament in April, only allows 897 workers to become full-timers.