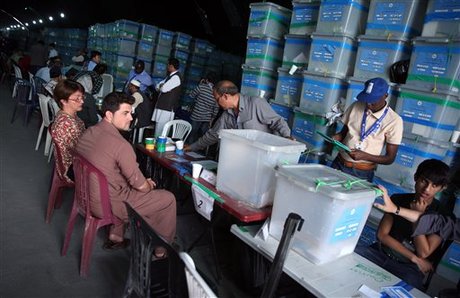 "Time is of the essence," Rasmussen said as he arrived for a two-day NATO summit in Newport, Wales.

"We need to know very soon whether (the accords) will be signed," he said, adding: "We are approaching the date when that decision has to be taken."

The accords cover the legal status of U.S. and NATO troops who will remain in Afghanistan after the alliance ends its longest ever combat operation there at the end of this year.

In 2011, Washington pulled all its troops out of Iraq in the absence of such an agreement with Baghdad and there are fears there could be a repeat in Afghanistan, putting at risk the hard-won gains of a bloody and costly 12-year war.

The June elections have so far failed to produce a new president as both candidates claim their opponent rigged the vote, despite repeated U.S. efforts to get them to accept the results of an audited recount.

Outgoing President Hamid Karzai decided not to come to the NATO summit, which was supposed to sign-off on the training mission. Afghanistan was instead represented by Defense Minister Bismillah Khan Mohammadi at the NATO session devoted to the country's future.

Rasmussen repeated his calls for a speedy conclusion on the post-2014 legal accords at a press conference afterwards, and said both presidential candidates had written to NATO "indicating that they will do all they can to reach a political agreement".

"If that materializes, we would warmly welcome it," he said.

NATO members had wanted a new president to attend the summit to prove that the country was becoming a functioning state after receiving billions of dollars in military and civilian aid.