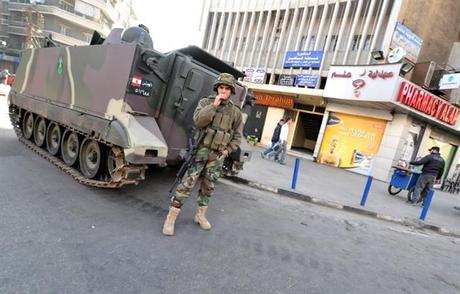 Unidentified gunmen on Thursday shot and wounded two residents of the Tripoli district of Jabal Mohsen in the nearby al-Mallouleh area during a “personal dispute.”

“Two young men who hail from Jabal Mohsen have been shot and wounded,” OTV reported.

The duo were in a “Mercedes 300 car,” according to the Tripoli News Network Facebook page.

One of them is a civilian called Asef al-Jurdi and he was seriously wounded while the other is the soldier Ahmed Dandashli, TNN said.

It described the incident as an “individual” dispute, adding that the wounded were rushed to the Saydeh hospital in neighboring Zgharta.

This is the first such development since five months, when Jabal Mohsen resident Hassan Ali Mazloum was shot dead while driving near Tripoli's al-Taqwa Mosque on March 26.

Prior to that date, several attacks had targeted civilians from Jabal Mohsen is many areas of Tripoli amid sectarian tensions fueled by the recurrent clashes with the Bab al-Tabbaneh neighborhood and the war in neighboring Syria.

The tensions abated as the army started implementing an unprecedented security plan on April 1, which saw the arrest of a number of top militants from both districts and the fleeing of several others, including Arab Democratic Party leader Ali Eid and his son Rifaat.

Unidentified gunmen on Thursday shot and wounded two residents of the Tripoli district of Jabal Mohsen in the nearby al-Mallouleh area during a “personal dispute.”

strangely, flame thrower was able to identify the "unidentified" gunmen.

stop lecturing about morals. You are well known for having none

mowaten you and I always think the same. Sometimes i feel as if we are the same person with different screen names

poor joan, she had a heart as big as a spider nest
https://www.youtube.com/watch?v=tIibX4Drzxs

terrorist: based on what did you decide that the civilian and the soldier who were victims of this attack are "zo3ran"? just because they are jabal mohsen residents?