American among 18 IS Jihadists Killed in Syria Raid 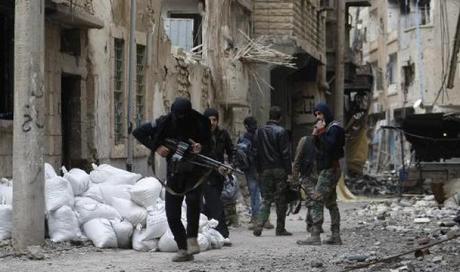 The death toll from a Syrian government raid on an Islamic State stronghold in eastern Syria has risen to 18, including an American fighter with the jihadist group, a monitor said Thursday.

The Syrian Observatory for Human Rights said Wednesday's strike destroyed a building being used as a headquarters and a prison by IS militants in Deir Ezzor province.

The strike on the village of Ghareebeh killed "at least 18 jihadist fighters and leaders, most of them non-Syrians and including an American," the Britain-based Observatory said.

On Wednesday, the Observatory reported that at least five IS militants had been killed in that attack, and that the raid enabled some of the jail's prisoners to escape.

IS jihadists control most of the oil-rich province of Deir Ezzor since routing government troops in July.

who cares what they use, be it airplanes, pellet guns or mustard gas. the most important thing today is that 18 wahabi hood rats have been sent for a permanent visit with abdul wahab in hell.