Report: Salam to Meet Delegation of Relatives of Captives on Friday 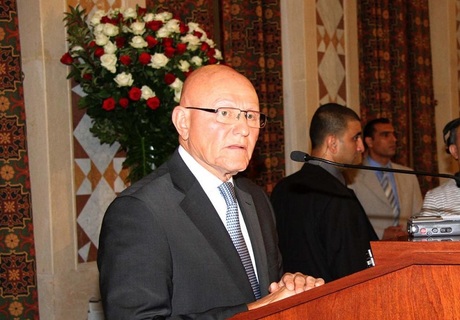 Prime Minister Tammam Salam is expected to meet on Friday with a delegation of relatives of the soldiers and policemen kidnapped by Islamists in August, reported As Safir newspaper on Friday.

It said that the meeting will be attended by Interior Minister Nouhad Mashnouq and will be part of the recently formed ministerial crisis committee tasked with following up on the case.

The relatives' follow up committee meanwhile convened on Thursday night and took the decision against heading to the Grand Serail to meet with Salam “because it does not have faith in the government, making the talks pointless,” reported As Safir.

Earlier, relatives of the abducted troops and policemen called on Army chief General Jean Qahwaji to “arrest all ministers” and swap them for the hostages, warning that the state has 24 hours to act or face unknown consequences.

“We have an initiative that involves the (army's) arrest of all ministers and swapping them for the troops held by the militants out of respect for the state's prestige,” a spokesman for the families said during a lengthy sit-in outside the Grand Serail, where the cabinet was holding a regular session.

“We give the state 24 hours to act or else we won't be responsible for the consequences,” the man cautioned on Thursday.

The relatives warned on Thursday of a “strife” in the Bekaa, calling for the release of Roumieh inmates if the matter ensures their loved ones' safe release.

The cabinet had however rejected the idea of holding a swap in exchange for the captives.

The soldiers and policemen were kidnapped in August in light of clashes between the army and Islamsist in the northeastern border town of Arsal.

This is the time for the peaceful and up till now silent majority of the Lebanese to be united and act ,regardless their ideology or religion , they should go on the street and demand emphatically from their political and religious leaders to do everything possible to stop the infiltration of barbarism in this country.

We have a political device in the US you might want to adopt for your current constitutional crisis. We make a cardboard lifesize photograph or cartoon of someone and say to the world, "This is our leader, ask him" (or her).
It's working well for us. Your problem is that your leaders sometimes say things, which confuses everybody.