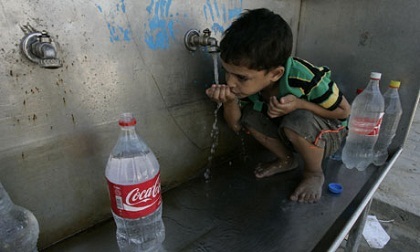 After two weeks with no water following Israel's 50-day offensive, Abu Osama took matters into his own hands, and like hundreds of others, sank a well beside his Gaza home.

After nearly two months of Israeli bombardment, power cuts and water shortages, he seized upon the ceasefire to get down to work.

"Water supplied by the municipality had not been arriving for more than two weeks and there were 50 of us in the house, including many children, so I decided to sink a well" to draw water directly, the 45-year-old said.

Water shortages are nothing new for Palestinians in the densely populated Gaza Strip enclave, and more and more people have been digging their own wells since 2006.

Israel imposed a blockade on the territory that year after Gaza militants snatched one of its soldiers.

Since then "more than 10,000 wells have been dug", said Monzer Shoblak, an official in Gaza's water authority.

"All these wells were dug without legal authorization, but without them may people would not have water throughout the day," he said.

It is a price that many residents of Gaza, where unemployment is running at around 40 percent, are unable to afford.

Abu Mohammed, who also refused to give his last name, decided to dig a well on his land to ensure that his family had enough water to drink and for washing.

"The water was totally cut and the war complicated our situation further," he said.

Umm Mohammed, his wife, said it was "no longer like living in the 21st century".

"We get our water from the well, and we bake bread on an open fire," she said.

"I used to have flowers and a beautiful garden, but everything has been scorched by the sun," she said wistfully, gesturing at two parched palm trees withering in dry soil.

During the devastating Israeli bombardment, water pipes were also hit in the only power station serving the Gaza Strip, a sliver of land squeezed between Egypt, Israel and the Mediterranean where 1.8 million people live.

The fighting aggravated already chronic water shortages in the enclave, said Rebhi al-Sheikh, deputy head of the body in charge of the precious resource in Gaza.

"The only reserve available to us is the coastal aquifer we share with Egypt and Israel made up of 55 million cubic meters," he said.

But this is far from sufficient, because for "Gaza alone you need 190 million cubic meters every year".

And the United Nations has warned that Gaza's already short water supplies could be running out.

The aquifer could be unusable by 2016 and the damage it has suffered may be irreversible by 2020, experts believe.

Shoblak said that some 95 percent of Gaza's water is already contaminated.

"The volume of nitrate in the water should not go above 50 milligrams per liter. In Gaza the levels are about 200-250 milligrams," he said.

Chloride, which should be kept to 250 mg per litre, in some areas of Gaza reaches 2,000 mg, Shoblak said.

The authorities in Gaza have already launched several new projects aimed at providing water to those most in need, but these have been suspended at inception because of the blockade that prevents certain construction materials from entering the Strip.

During the ceasefire negotiations, Israel said it would allow the entry of some materials for reconstruction, without specifying what it would permit or when it would cross into Gaza.

But for the moment, no cement, gravel or steel has passed through the border crossings linking Gaza to Israel.

The Jewish state says such materials could be used by Palestinian militants in the territory to make weapons.

Israel used to supply Gaza with water via tankers and a pipeline, until Hamas sent rockets into the Kerem Shalom Crossing, Hamas knew exactly what they were doing when they chose to deny the Gazan population of water and other necessary provisions when they did this, just like they did when they sent rockets at the pylons carrying electricity from Israel into Gaza.