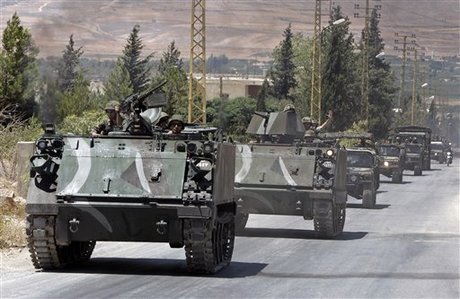 Arrest warrants were issued on Friday against seven detainees over their links to August's clashes in the northeastern border town of Arsal between the army and Islamist militants, reported the National News Agency.

It said that Military Examining Magistrate Imad al-Zein issued the warrants against a Lebanese and six Syrians for their connection to the clashes and Imad Jomaa, a member of the al-Qaida-affiliated al-Nusra Front whose arrest sparked the Arsal unrest.

NNA said that Friday's arrest warrants bring the total number of detained suspects in the case to 28.

They were also been charged with seeking to carry out terrorist attacks, seizing control of Lebanese territories in order to set up their own emirate, killing soldiers and civilians, sabotaging military vehicles, and damaging public and private property.

Several soldiers were killed and wounded in the Arsal clashes that started on August 2 and ended five days later with a ceasefire.

The Islamists withdrew from the town, abducting with them a number of troops and security forces.

how dare you!?!?!?
where is ashraf rifi to defend these poor innocent men who only seeking to carry out terrorist attacks, seize control of Lebanese territories in order to set up their own emirate, kill soldiers and civilians, sabotage military vehicles, and damage public and private property?

How do we combat the Ebola or Hezbolla spread in Syria? Can they guard the borders with Israel and Syria?

Send them straight to the gallows