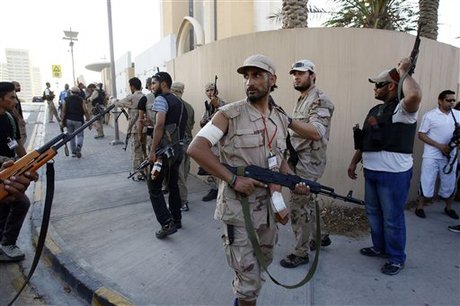 Grave human rights violations have been committed during clashes in the Libyan cities of Tripoli and Benghazi, with disastrous consequences for civilians, a U.N. report said on Friday.

The warning came from the U.N. mission in Tripoli (UNSMIL) and U.N. rights office only days after Libya's outgoing government admitted from its safe refuge in the east that it has effectively lost control of the capital to armed militias.

The report accused the combatants of "indiscriminate shelling and attacks on civilian objects, the shelling of hospitals, the abduction of civilians, torture and unlawful killings", including of women and children.

"Dozens of civilians were reportedly abducted in Tripoli and Benghazi solely for their actual or suspected tribal, family or religious affiliation, and have remained missing since the time of their abduction," it said.

The United Nations agencies appealed to all parties to prioritize the protection of civilians.

"All armed groups must desist from violations of international human rights and humanitarian law, in particular all acts that may amount to war crimes, including indiscriminate shelling, enforced disappearances, murder, abductions, torture and other ill-treatment, and destruction of property," it said.

Tripoli has witnessed heavy fighting in recent weeks between militias, mostly Islamists and nationalists, for control of the city's international airport.

The eastern city of Benghazi has also been rocked by almost daily clashes between forces of a rogue former general, Khalifa Haftar, and Ansar al-Sharia jihadists.

"All armed groups must remove from active duty and hand over to the justice system those among their members suspected of having committed abuses," said the report, which covered the period from mid-May to the end of August.

"Political or military leaders can be held criminally responsible not only if they order crimes, but also if they are in a position to stop them and do not do so."

The United Nations estimates that the fighting has displaced at least 100,000 people, and another 150,000 have fled the country, including many migrant workers.

Its report said the latter had been "particularly exposed" by the violence and were facing difficulties crossing borders, along with refugees and asylum-seekers.

Combatants were continuing to harass and attack journalists, including imposing restrictions of movement, confiscation of equipment, abductions and assassinations, it added.

The two agencies urged all sides to "cease all armed hostilities and engage in an inclusive political dialogue to build a state based on the respect of human rights, democracy and the rule of law".

On Monday, the interim government led by prime minister Abdullah al-Thani, which resigned last week, said armed groups were in control of ministries and blocking access to government workers.

Libya has been sliding into chaos since Moammar Gadhafi was overthrown and killed three years ago, with interim authorities confronting powerful militias which fought to oust the veteran strongman.