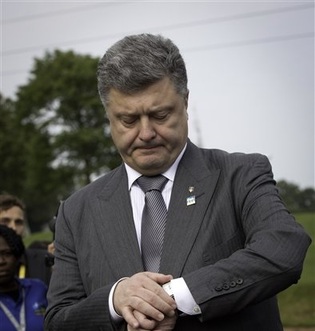 The highly-symbolic trip to the strategic port of Mariupol came just as EU officials called a new meeting to decide on fresh sanctions against Moscow should the truce fail.

The pro-Western leader donned a military uniform for his first wartime visit to a city whose fall to the rebels would open a route between Russia and annexed Crimea, and cut off Ukraine from its southeastern coastline.

He vowed that Mariupol, the only major city in the eastern conflict zone still under government control, would remain part of Ukraine.

And in what appeared to be comments directed at both the rebels and Russia, he said: "It is impossible to win the conflict just by military means."

"The more we increase the pressure, the more Russian troops are on our territory," he said in English.

"Withdraw foreign troops and close the border and within a week we (will) find a compromise," he said in his most substantive comments since Friday's ceasefire was signed in the Belorussian capital Minsk.

Poroshenko also said 1,200 prisoners captured by insurgents in the five-month war had been freed, but gave no further details.

Kiev had never admitted to so many captives but Poroshenko's vague wording suggested that the rebels had released them as part of a swap agreed under the Minsk truce deal.

Ukraine's top defense spokesman had earlier said the rebels had handed over only 20 government soldiers.

And the insurgents -- quick to pin blame for various crimes and abuses on Kiev, while claiming to be acting in the interests of ethnic Russians rather than the Kremlin -- have not confirmed any prisoner release.

Poroshenko spoke as EU leaders struggled to secure unanimous support for expanded economic sanctions on Russia over its alleged role in fomenting the Ukraine conflict.

Diplomatic sources said the differences apparently revolved around whether the new measures could be lifted quickly if the truce holds.

EU President Herman Van Rompuy said on Sunday new sanctions could be reconsidered "if the ceasefire is durable, and/or if the peace talks start."

Russian Prime Minister Dmitry Medvedev had already warned of an "asymmetrical" response should new sanctions be adopted, saying that EU airlines would be banned from flying over Russian airspace on their lucrative Asian routes.

Those affected would include Russian oil giants Transneft and Rosneft, the world's largest publicly traded crude producer which is run by a close Putin ally, and the oil unit of gas conglomerate Gazprom.

NATO accuses Moscow of sending in hundreds of paratroopers and truckloads of weapons to back fighters who launched a decisive counter-strike across the southeast two weeks ago, dramatically reversing gains by the Ukrainian army.

But Moscow dismisses the allegations of direct involvement as a Western fabrication to justify bolstering NATO forces on Russia's western frontier.

The warring parties in Ukraine have each accused the other of breaching the pact, the first backed by both Kiev and Moscow to end a conflict that has plunged East-West relations to a post-Cold War low.

The United Nations said on Monday the conflict had already killed more than 3,000 people, including the 298 on board a Malaysia Airlines shot down over rebel territory in July.

The first attacks outside Mariupol late on Saturday erupted only hours after Poroshenko and Russian President Vladimir Putin both said the truce was "generally holding."

One woman who was apparently trying to flee the violence died when her car was riddled by machinegun fire.

"I heard explosions but they were far from here," a retired building worker named Vera said on Monday.

"The day before it was horrific. It was terrifying," she told AFP.

Artillery salvos also echoed near the major rebel stronghold of Donetsk after its airport came under attack by insurgents at the weekend.