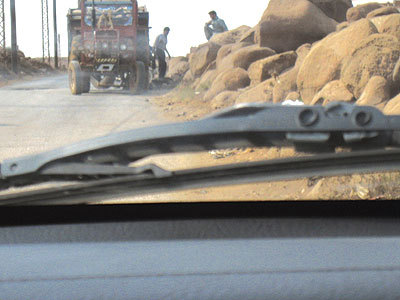 The Lebanese army thwarted on Saturday an attempt to smuggle tasers and individual communication devices to Syria through an illegal border crossing at Deir al-Ashaer in the Rashayya region.

The National News Agency reported that the army halted a pickup truck loaded with equipment as it was attempting to enter Syria.

It confiscated the equipment and investigations are underway in the matter.

One would hope that the army would be as effective in the other direction!

True Youssef. The army manages to intercept tazers going into Syria but cannot detect the missiles that are sent by Syria to Hezbollah, in spite of the clear stipulations of UN Resolution 1701 and being responsible of implementing it. Wondering why the West thinks twice before selling the Lebanese army weapons? It is because they know very well that these weapons would go into Hezbollah's warehouses!

Titus,
There is no mention Mustaqbal anywhere, do not spread rumours.

Why are you afraid from tasers and individual communication devices. The se cannot fight the tanks and artillery and snipes of the murderous regime of Assad.

how do we know this isnt HZ to help crack down on protesters?????

Hey Naharnet, Where are the comments that I know many people wrote and you are yet to publish? Are you dozing off? Are you on drugs? Are you lazy? Dumb? Cowards? What?

So the army is officially working for the baath party now?

Titus, throw yourself into jail, you're a danger to society.

Replace the tasers with real weapons, ones sent from Syria previously