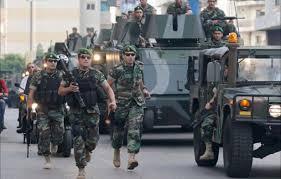 The army on Tuesday arrested three Syrians who belong to a terrorist group in the Bekaa region of Baalbek, pressing on with a crackdown that started in the wake of the deadly Arsal clashes with jihadist militants.

They were taken to interrogation along with the car's driver, the agency added, without naming the terrorist group.

Earlier in the day, the army had staged “a series of raids on Syrian refugee gatherings and places of residence in the Akkar towns of Akroum, Mashta Hassan and Mashta Hammoud,” according to NNA.

Several people were arrested in the operation.

Later on Tuesday, Syrian national Ayyoub B. Gh., 26, was arrested at an army checkpoint in Akkar's al-Abboudiyeh “while carrying a hand grenade in his bag,” NNA reported.

Al-Jadeed TV, meanwhile, said the army arrested a number of Syrians in Alman, north of Sidon, noting that “they included a man accused of recruiting new members for a terrorist group.”

On Monday, security forces arrested more than 25 Syrians during raids on refugee gatherings in the northern Koura district and the Northern Metn area of Dekwaneh.

There has been growing resentment in Lebanon against Syrian refugees after militants from the Islamic State and al-Nusra Front abducted in August a number of troops and policemen from the Bekaa town of Arsal during fierce clashes with the Lebanese army.

Dear Army Intelligence: any news on the color and model year of the KIA car that was used by HA to assassinate Minister Shatah would be highly appreciated.

lol roar. and i'm very surprised they didnt find the passport of nasrallah near the hariri bombing location.

FT please not that m14, israel, the STL and the CIA do not need evidence to accuse. they "just know" a minute after the bombing who was behind it. but 10 years later they still can't show you any kind of proof.

nice 5 minute video that sums it all:
https://www.youtube.com/watch?v=yuC_4mGTs98&html5=1