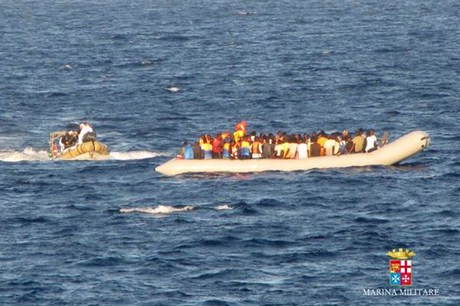 People smugglers who allegedly sank a boat killing up to 500 migrants are likely guilty of "mass murder" and should be brought to justice, the U.N.'s new rights chief said on Friday.

"The callous act of deliberately ramming a boat full of hundreds of defenseless people is a crime that must not go unpunished," Zeid Ra'ad Zeid al-Hussein said in a statement.

"If the survivors’ accounts are indeed true -- and they appear all too credible –- we are looking at what amounts to mass murder in the Mediterranean," he said.

In one of the deadliest migrant shipwrecks on record, some 500 migrants including up to 100 children drowned after smugglers sank their ship last week when the Syrian, Palestinian, Egyptian, Sudanese and other passengers refused to change to a smaller vessel on their way to Italy, survivors said.

Just 11 people survived the incident off Malta, with some of them telling the International Organization of Migration (IOM) their boat was intentionally sunk by the smugglers, said to be Palestinians and Egyptians.

"This is a truly horrendous incident," Zeid said, emphasizing that countries circling the Mediterranean had a duty "to clamp down on the smugglers who are exploiting one of the most vulnerable groups on the planet and endangering their lives, virtually on a daily basis, purely for financial gain."

In addition to finding and punishing the perpetrators, countries worldwide must address the root causes of such tragedies, said Zeid, who took over as U.N. High Commissioner for Human Rights earlier this month.

"Far too many refugees and migrants are dying all across the world in an effort to flee conflict, systematic political oppression and human rights violations, including economic deprivation," he said.

The states of origin must tackle the root causes for people fleeing, while the European Union and other destination and transit countries should seek better ways of managing growing numbers of migrants, without letting "xenophobia-driven politics" get in the way, he said.

According to U.N. refugee agency, more than 2,500 people have drowned or gone missing attempting to cross the Mediterranean to Europe this year.

All countries should "do more to address the range of factors pushing so many people into the arms of the smugglers," Zeid said, stressing that "migrants have the same rights as all other human beings."

Countries should react as resolutely when migrants are killed by smugglers at sea as when their own citizens perish at the hands of criminal gangs at home, he said.

"Yet very few people who kill, rape or rob migrants during their journeys end up in court," he lamented.

Pointing out that refugees from war-ravaged Syria make up the largest and fastest growing group of people seeing asylum in Europe, Zeid insisted that "it is essential that refugees are able to escape to safety."

Destination countries meanwhile, should "not penalize them for taking irregular routes" and should take "more robust steps to protect them when they do."