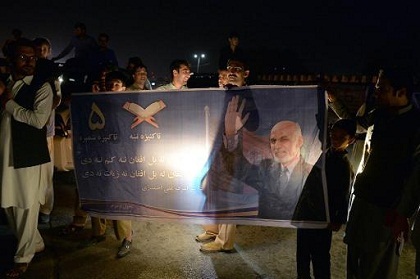 Secret election results and an uneasy power-sharing deal have raised fears that the legacy of the U.S.-led intervention in Afghanistan will be a government that lacks the legitimacy or strength to avert the risk of a return to civil war.

A vast array of foreign armies, diplomats, development experts and aid groups converged on Afghanistan after 2001 in a multi-billion-dollar effort to foster peace and progress after the harsh years of Taliban rule.

A credible, democratic government in Kabul was central to the mission's aims, which stretched from defeating the Taliban insurgency to building power stations, improving women's rights and boosting literacy rates.

But, as NATO's combat troops head home and international aid declines, the election of President Hamid Karzai's successor produced a fragile compromise deal between rivals rather than a clear-cut winner chosen by voters.

Election officials on Sunday did not reveal the final vote count, simply declaring Ashraf Ghani as the president-elect and Abdullah Abdullah as "CEO", after weeks of negotiations between the two campaign teams.

Officials said figures would be released at an unspecified future date.

"We do not know if a government of national unity was merited by what happened at the polls," analyst Kate Clark said in a briefing paper on Monday for the Afghan Analysts Network.

"This political transition... cannot be called democratic, as it actually avoided democratic means to determine who won the election.

"Despite the huge numbers of voters turning out, in the end, the deal to form a successor administration to Karzai's was done behind closed doors and with huge amounts of foreign help."

Ghani and Abdullah -- and their teams -- clashed regularly during the standoff over allegations of massive fraud in the June 14 election, and the two camps face a tricky test in now working together in government.

"From the beginning, there were disagreements between both teams in the election process," political analyst Mia Gul Waseeq told AFP.

"Afghanistan is in a very sensitive phase as widespread fraud was committed, and it would have been better if we had a transparent election.

"Both teams want to introduce their elites (into government), so I believe there will be problems in the future.

"Each problem that arises will mean one reaction from one side and another reaction from the other. The leaders must control their supporters."

Under the constitution the president wields almost total control, and the new government structure will face a major test as the security and economic outlook worsens.

According to a copy of the unity government document seen by AFP, the CEO could become the official prime minister in two years' time -- a major change to the strongly presidential style of government forged by Karzai since 2001.

Dividing up other government posts could also create friction after the long and mercurial reign of Karzai, who built up a nationwide network of patronage.

U.S. Secretary of State John Kerry played the key role in bringing the sides together, visiting Kabul twice in the aftermath of polling day when the risk of conflict peaked and staying in constant contact with the two candidates.

He also instigated the complex and expensive audit of votes that was effectively brushed aside by the "unity government" deal.

But the dangerous political stalemate had become so entrenched that the U.S., the U.N. and many Afghans all welcomed the fact that the power struggle was over -- for now.

"I am happy that the president is finally elected," Moeen Khan, a gardener in Kabul, told AFP.

The risk in the months and years ahead is that any collapse of the ruling coalition could degenerate into violence along the ethnic lines of the 1990s civil war.

Ghani's support is based among the Pashtuns of the south and east, while Abdullah's loyalists are from Tajik and other northern groups.

"There will probably be some unfavorable emotions among the supporters of both teams as the delayed election result badly affected the country economically and in security," said Ahmad Zia Rafaat, a lecturer at Kabul university.

"Karzai's presidency did show that tribes from all groups can be represented in the government."

The outgoing president may well remain an influential player after he steps down. But when the unity government deal was signed, he kept his distance.

"The contents of this agreement was drawn up by them, we were not involved," he said at the signing ceremony.