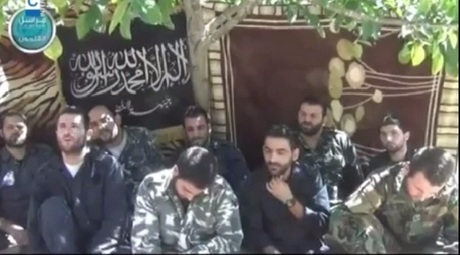 The continued captivity of soldiers and policemen by jihadists is threatening to spiral out of control after their families took escalatory measures and Interior Minister Nouhad al-Mashnouq said the authorities would not negotiate with the terrorists unless they provide guarantees that they wouldn't execute more captives.

“We want absolute guarantees that the abductors will stop killing (more captives) before we discuss anything else,” al-Mashnouq told As Safir daily in remarks published on Tuesday.

“The Lebanese state is confronting murderer terrorists who want to ignite Sunni-Shiite strife,” he said, advising the Lebanese politicians to unite because failing to do so “would serve the killers through chaos and strife.”

The families of the soldiers and police taken captive by the jihadists in the northeastern border town of Arsal in early August blocked two highways on Monday and promised more measures until the release of their loved ones.

Their continued protests have put pressure on the authorities, which are accused of not trying hard enough to win the release of the hostages.

A high-ranking security official confirmed to al-Joumhouria that a committee tasked with following up the case of the captives has conditioned a written pledge by al-Qaida-linked al-Nusra Front and the Islamic State group that they would not harm any of the captives.

He did not give further details.

His remarks came as the army tightened its grip on roads that link Arsal with its outskirts to stop the supply of oil and equipment to the militants.

isn't Arsal municipal chief wanted from the Lebanese state ???
the noose is tighter on the neck of these filth of terrorists and as mr fatfat said that he wants the west to take care of his enemiesfriends isis and nosra the terrorists , the us and france started bombing targets of isis and nosra in Syria and what is left if any of these filth general winter will freeze them to death
isis, nosra will be defeated with their allies and funders

You are such a smart one to say the least. Sectarian uneducated and a mouthpiece.

funny isn't it flamethrower! Your Hizb is the only one that keeps its word...

The Lebanese state is confronting murderer terrorists who want to ignite Sunni-Shiite strife, yep and their names are Samaha, Mamlpuk, Adnan, Shaaban, Eid and Assad.

The poor flamethrower's over aggressive behavior, symptoms of a nervous breakdown. Too many Hezballah martyrs means not many posters so flamethrower is having to work overtime using multiple accounts on nothing but coffee, ka3ek and halitosis to cover.

of course we can hear good news since your hands are full of leb soldiers blood and they are kidnapped in your back yard.

and I am sure as always you have evidence the army intelligence does not have. Hence, the man is still free and not wanted. But, who knows.... many of you here on the forum seem to have more information than the ISF, and all the security agencies combined.