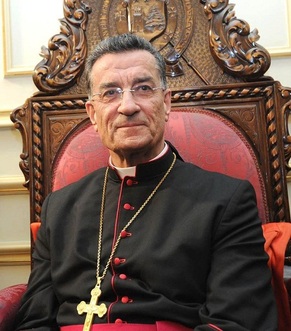 Maronite Patriarch Beshara al-Rahi called on Tuesday for the election of a president, the implementation of the Constitution and the control of illegitimate weapons, urging the newly-inaugurated Grand Mufti to protect Lebanon's common Christian-Muslim culture.

“It is our duty as religious officials not to remain silent to violations of the country's principles and constitutional framework,” said al-Rahi during talks with Grand Mufti Sheikh Abdul Latif Daryan at Dar al-Fatwa.

“It is unacceptable years after the approval of the National Pact to wonder which Lebanon we want,” he said.

“No party has the right to have hegemony over the country and change the type of democracy we have,” he said. “There should be loyalty to Lebanon first.”

Al-Rahi called for unity and cooperation with the Mufti, who was inaugurated last week, on social and development issues.

“The Christians and Muslims in Lebanon are a single family with the same culture,” he said.

“We have a big challenge which is the protection of our common culture and its development,” the patriarch stressed.

“The recent developments, economic collapse … and corruption tarnished the image of the Lebanese human being,” he said.

“Personal and social development is the new face of peace,” he said.

“It is the duty of religious leaders ... to urge our politicians to work for the people's benefit and improve the state's values,” he added.

Al-Rahi's visit to Daryan at the head of a Maronite bishops' delegation comes as Muslim and Christian religious leaders are expected to hold a summit on Thursday.

A closing statement will be delivered at the end of the summit reiterating rejection to terrorism and renewing adherence to national coexistence, unnamed sources told al-Liwaa daily on Tuesday.

The statement will also call for the necessity to safeguard Lebanon at the political level by holding the presidential and parliamentary elections.

Since August, Lebanon has been on a knife edge when fierce clashes erupted in the northeastern town of Arsal between the Lebanese army and jihadists of the Islamist state.

The clashes killed several soldiers in addition to others that were held captive by the IS, which in turn set a list of demands to free them.

The IS has later killed 3 of the soldiers in response to the Lebanese government’s refusal to meet their demands.