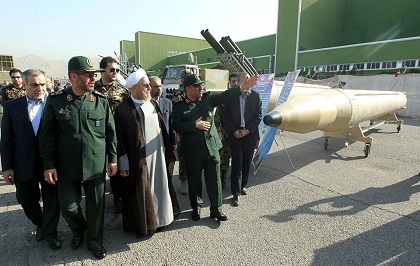 Iran on Tuesday unveiled a new missile-equipped drone to boost its military arsenal, as part of events marking the end of its 1980-1988 war against Iraq.

"The research, experimentation and testing phases have been completed," he said.

"These new drones are capable of destroying different types of aircraft, including fighters, drones and helicopters," he added, without giving technical specifications.

State television broadcast footage of what it said was the new drone being uncovered at a ceremony held at a secret location.

Apart from a fast-moving ballistic weapons program, Iran has since 2010 been producing drones which the defense ministry says are capable of firing missiles with a range of 1,000 kilometers (more than 600 miles).

Tehran says its weapons programs are purely for defensive purposes, but the United States whose Fifth Fleet is based in Bahrain across the Gulf has often voiced concerns.

Be prepared for the media attacks. And thank ISIS to keep them occupied.Their warfare has been reduced to aerial bombing. Develop and practice anti aircraft technology even further. Way to go.