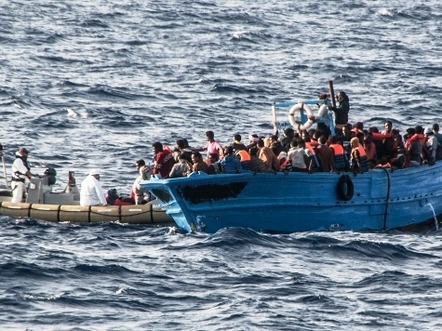 Police have arrested a Lebanese smuggler and scores of Syrians and Palestinians trying to flee to Italy, the state-run National News Agency reported on Wednesday.

Around 107 Syrians and Palestinians from the southern refugee camp of Ain el-Hilweh were arrested at the port of the northern city of Tripoli, NNA said.

Police also apprehended a Lebanese member of the smuggling network. The agency only identified him with his initials as F.A.

Usually, migrants such as Syrians and Palestinians are entering Egypt under false pretenses before trying to travel on to Europe.

Thousands fleeing war or poverty have been arriving weekly in smugglers' boats on Italian shores or needing rescue at sea.

Greece is also a major point of entry for people from strife-torn regions seeking a better life in Europe.

Earlier this month, 500 people were feared drowned after their boat sank off Malta, leaving just 10 survivors.

According to the U.N.'s refugee agency (UNHCR), over 2,500 people have drowned or gone missing attempting to cross from North Africa to Europe this year.

why not let them leave lebanon

why would the police do such a stupid thing???
let them go to their freedom and live a good life, we don't need them here...

why on earth stop those people? they will end up in roumieh!

Lebanon is such a scum country, let them create better lives for themselves instead of living in a shit hole like Lebanon.

Apparently the team of smugglers set this whole situation up, and the main smuggler ran away with the money.