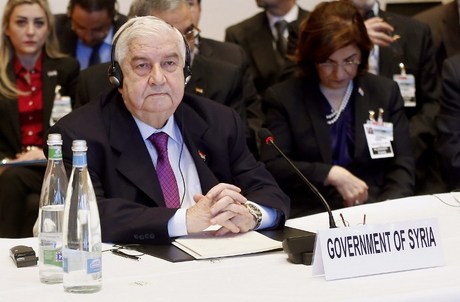 Syrian Foreign Minister Walid al-Muallem has called for cooperation between Lebanon and Syria to confront the terrorist threat posed by the Islamic State group and al-Nusra Front militants.

As Safir daily on Thursday quoted al-Muallem as saying that Lebanon should not adopt a disassociation policy regarding terrorism.

“There should be Lebanese-Syrian cooperation to confront this terrorism that has no boundaries and poses a threat on both countries,” the FM reportedly said during a stopover in Beirut on his way to New York to attend the U.N. General Assembly session.

Damascus has been keen to present itself as an ally in the fight against jihadists, though it uses the term "terrorists" to refer to all those who have been fighting to oust President Bashar Assad since 2011.

According to As Safir, al-Muallem expressed satisfaction with U.S.-led strikes against the IS and other al-Qaida-linked groups in Syria.

He reiterated that Damascus was being informed about the attacks despite a denial by Washington.

The latest strikes were on Wednesday, when U.S., Saudi and Emirati warplanes bombed IS-controlled oil refineries in eastern Syria.

The oil there is being used to fund the jihadist group's brutal rise from rebel faction to alleged global threat.

Ok, hand over Ali Mamlouk and Rifaat Eid as a sign of how serious you are about fighting terrorism ya terrorist.

Maybe they did like all of your current allies, remember how frangieh considers assad fanily as his... same friendship ties have existed for HA, Amalm Jonbi, etc

now yto spite them, you want to collaborate with a falling regime who is as bad and gruesome as da3esh just to seek power
shame on you

Sure and likewise we should do peace with Israel. Remember that Lebanon was going to sign a peace treaty with Israel but thanks to Assad regime it was not done.

So...let me get this straight FT... it was filth to collaborate with Syria in the 90's (and surely you must be referring to the BIG collabos such as geagea, Tueini, Kassir, and all the others....) but today... it is fine to collaborate with them (Aoun Hezb) !!! ??? As if they had not gone out from the door and come back from the window... what a farce!

I had high hopes for this anti IS coalition, but not anymore and not unless things get clearer. Informing Assad beforehand of intended targets raises many concerns. This approach will not only alienate the moderates but it will also strengthen the support for ISIL.

you really had high hopes for a coalition that is led by a country that has brought nothing but bombs and destruction to the middle east for how many years now???? That is sad.

@cityboy
Yup, and we still do. It is certain that Iran is unable to face them. That the US has brought nothing but bombs and destruction to the ME is only your opinion and we don't share it.

What has America brought to Libya, Iraq, Afghanistan, Somalia. What business is it to america to be bombing inside Syria. I dont for a minute believe those beheadings of the americans and british. Why isnt america bombing Saudi Arabia, beheadings there are sanctioned by the government, but oh wait, Saudi Arabia will get its turn because even Saudi Arabia will have to be destroyed too. Lebnanfirst, look at the big picture. The whole world is being turned upside down, bit by bit.

America and the zionist create the cancer, in this case ISIS, and now they want to remove it by declaring that they have the right to bomb whereever they choose in the middle east. you have to wonder what their real aims are.

esquire, please come up with something a little more original than that. Other retards like yourself say the samething day in day out.

Cityboy, usa is doing its own interest as all the other countries (even caritas has own interest) what is our interest by sending iur local shiite millicia in this stone age war starting from yemen, irak, syria.... ?????
Please ellaborate, how is jaish el mehdi better than isis retards??? How is iran more secular/democratic/modern than all the imperialist west, how is it not interferring with the other countries by sending revolutionnary guards all over the middle east??? How do u think this will end?
Cityboy, aoun berri frangieh geagea gemayel... All this wont count when shit will be all over lebanon...
Now go have ur chupachups and feel free to enlighten us...

as if HA has brought prosperity and peace
by undermining state sovereignity, kicking all moderates from southern lebanon including shiites, exterminating the left resistance, waging wars left and right and killing people now in teh name of hussein

iran has also brough peace to iraq post saddam through establishing an ethnic religious based regime alienating moderates and imposing shiite militias
same applies for yemen, where huthis sign a peace deal and go about taking over all security and governmental institutions

excellent moallem.. Can u start by stopping sending us yur terrorists? like absse and so many others...

You mean the sort of cooperation that leads to the arrest of any person that voice criticism to the Assad regime like singer Asala.

Please tell us how Lebanon is controlled by Wahhabis

Bashar, as long as you're holding on to the "I'm Portuguese" charade shouldn't you at the very least assume the identity of a smart, literate, competent Portuguese. You are embarrassing real Portuguese everywhere.

Really Bashar? Your English just got even worst than at any previous time, you are trying too hard and still failing.