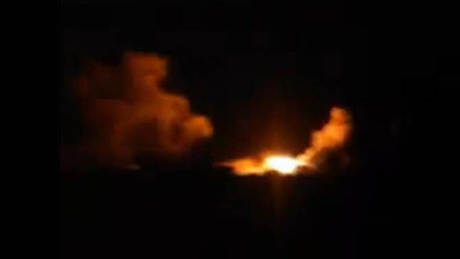 A series of strikes in Syria overnight by a U.S.-led coalition killed 14 jihadists from the Islamic State group and five civilians, a monitoring group said on Thursday.

The Syrian Observatory for Human Rights said the militants were killed in strikes in the eastern province of Deir Ezzor, and the civilians died in raids in northeastern Hasakeh.

The strikes largely targeted oil facilities captured by the Islamic State group (IS), though Observatory director Rami Abdel Rahman said at least one IS checkpoint was among the targets hit during the night.

Among the civilians killed in Hasakeh was a child, he added.

On Wednesday, Pentagon officials announced that the U.S. and Arab allies had resumed bombing raids that began a day earlier, hitting oil facilities held by IS.

IS militants have seized a series of oil facilities and fields and are believed to sell oil on the black market to bring in revenue.

oh it's all good, children and civilians killed by US strikes are halal

Of course not they are not halal and it's condemnable and tragic. However you seem quite happy and you find justifications when the Assad regime bomb explosive barrels on rebels knowing that these type of bombs are not accurate and cause many civilian casualties.

greatpierro, condemnable and tragic? Aint the US hypocrites going to face charges on war crimes? No ofcourse not, indeed it is halal for America to kill civilians whereever they are.

notsogreatpierro: take it easy with your lies, I was never "happy" about any civilian casulaty, in syria or anywhere else in the world. what bothers me is how all you bunch kept condemning the syrian army for fighting terrorists on its soil, claiming that they were killing civilians, but fail to have the same reaction when it's done by a foreign force that has nothing to do here.

no matter what you say, the men and women in the syrian army are from all areas in syria, from all communities, and they are fighting to defend their families, their country. what is US business here? dont you find it awkward that they always have all sorts of noble justifications to bomb arabs, and it always "just happens" that it is in oil-rich areas?

I was thinking the same thing mowaten. We are both shia extremists and I hope people don't think we are the same poster.

gee... get a life dude, it's really becoming way too pathetic.

Mowatern nowres about civillians, after more than 200 000 dead, after barrel bombing, after chemical weappons, after freeing lokmann and other jihadist now in isis, after bombing fsa while it was attacking isis...
Dear mouwaten assad is long gone, deal with it, now do ur math, ur brloved shiite millicia is engaged ind a stone age war going from yemen irak syria and god knows where, what do we benigit from it as lebanese??? Karbala2 the revenge? Franckly and with all my due repect i don't care of ali/hussein/omar/zoulfikar...whatever happened centuries ago, i don't care about iranian mollas and i'm against letting them having nuclear weapon (if jews fanatics have nuclear weappon so we should be with shiite fanatics also having nuclear weappons?
I only care about how to live in my country, how to raise mu childreen in the 21century..u know?...
Now go hv ur chupachups man...

shaker absi, was ambushed and killed by syrian security forces, back in 2008 so i dont see why you would even mention him.

and what is your point regarding lokman? i dont get it!

tens of thousands of people were freed from syrian prisons at one point or another, and of course some of these ended up joining extremist groups. kind of logical since prisons are usually filled with the scum of the earth.

But if you want to criticize, tell us how do you avoid that? what is your solution? would you keep everyone in jail forever? because nobody can know who will later do what, especially when we don't have access to geha's crystal ball to read the future.

finally, i see you posting the same thing about lokman all the time, but never a word about the n1 guy in IS! what about Bag-daddy? He was freed from a US prison in Iraq, some say that it was during his time there that he was recruited and trained by the CIA.

My dear mowaten:
1-chaker el abssi was killed by syrian forces (maybe) but after being sent to lebanon after being freed by assad (weird how assad freed islamsists and sent him to leb no?
2- lokman and 500 islamist where freed in 2011 by assad while political prisonner qhere kept, tortured,raped, even the poor guy who won a horse race againt bassel el assad was kept in jail untill recently, so assad giving amnesty to islamist....weird no?
3- i like how u passed over smaha, tripoli bombings, political assassinations..
4- usa is doing its own interest, like iran, ksa u know every country..what is our interest to send our local shiite millicia in irak/syria/yemen and god knows where? To engage in a retarded conflict going for centuries? To support an islamist state of iran and illuninated khomaiinii?...
Shiite retards sunni retards (even central affrica christian retards) all retards man...
So wen elaborate, tell me more...
Chupachups?

1- absi was killed by syrian forces, not maybe.
and saying he was "sent" to lebanon by assad is pure wishful thinking to suit your propaganda.

2- exaggerated and untrue. 200 prisoners, including political prisoners and islamists were freed in 2011. at the time the regime made many concessions in attempt to calm protests, this was one of them. but you completely dodged the point i made above, how do you prevent that? keep everyone in prison forever?

3-regarding tripoli bombings and assassinations, again, you're accusing without proof, wishful thinking and propaganda. in the samaha case there might be some intent, but the circumstances around it are very blurry (the agent who convinced him to do it, then denounced him, then was protected and smuggled out of the country by the ISF, that's quite fishy) so we'll have to wait for the trial and see what comes out.

4- usa doing its interest makes it okay?? i wonder from how deep a brainwash you come, to make it sound like you think it's normal for the us to bomb arabs for oil profits. HA acted in syria to protect lebanon, and in iraq to help people who are facing a sectarian onslaught. how is that even remotely as bad as killing for profit like the US?

1- so abssi was freed from syrian jail, went to lebanon by mistake on its way to jordan? And by mistake eneded up between armed islamists in nahwer el barred without syrian authoroity knowing anything about it... Ok...
2- lokman and the other 500 islamist where freed with other political figures (i doubt for the other with all the un repport of political prisonners women in jail and tortured, but screw UN SANA is a better source... Ok...
3- no proof, no evidence of tripoli bombings (videos were photoshopped ok..) nothing on the hezbos trying to blow up boutros harb elevator (was the repair guy ok..) nothing on smaha (officially no trial bc mamlouk couldn't get notification by lebanpost, OFFICIAL REASON, ok....
4- yes USA IRAN SyRIA all the couties do their own interest so what is our intersest to send a shiite millicia doing jihadist duty in irak syria yemen.. Engaging in midleaged war, khomaini as supremm leader???...

that load of rubbish is not worth answering. think what you want, doesnt seem like you're open to any logic anyway.

Hypocrisy Movaten, shame on you.

U.S.-led Raids on Syria Killed 14 Jihadists, 5 Civilians ...............
Has this been an Assad air raid or an ISIS or HA raid the casualties would been 5 fighters and 14 civilians killed. Stop the hypocrisy.

I wish the Pentagon and Military planners would read your military analysis. Something another Flamethrower!

The Martians and ninja turtles are involved too.

Flamer, stop talking about "civilians" living in the oil fields. These oil fields are in the middle of the desert, which is nowhere near civilians. And for the very few civilians that are there, you don't even know who they are or who to whom they pledge allegiance. These airstrikes are more effective than Assad's barrel bombs because he didn't even lay a finger on the oil fields. He is buying oil from ISIS, he's not gonna blow up the oil refineries because he needs oil for the war against the "FSA-Nusra terrorists" (as karim calls them).

Mowaten, stop your Assad propaganda. He kept a guy in jail (without trial) for winning a horse race against his brother. It's a crime to be better than the Assads at something. What about the Tripoli bombings and the Samaha case? Did the bombings not happen? Why is Rifaat Eid in California? How does Libanpost prevent a trial from taking place??

And the children HA was involved killing along side the regime, nice how they blabber as if they did nothing wrong...

when you swat a mosqituo, do you count how many you get...? of course not, so why when you kill a wahabi terrorist do you report the number? these people are worthless, unlike mosquitos which serve purpose even tho we dont count them when we kill the annoying buggers.

Imagine !!!
Stop wasting your time,you want them to condemn the crimes committed by Assad regime father and son when they are unable even to recognize the war crimes committed by both against the lebanese.
FT Mouwaten are nothing by syrian agents getting paid to do a job.
Simply Mokhabarat souriye.