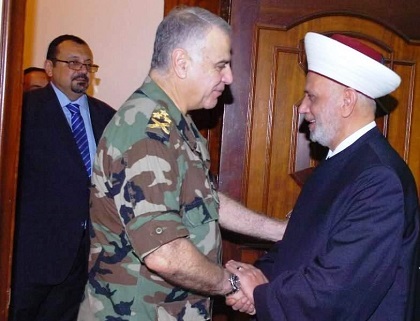 Army chief Gen. Jean Qahwaji said on Thursday that the military was keen on the safety of the residents of the northeastern border town of Arsal, and denied that troops had laid a siege on them.

The state-run National News Agency said Qahwaji visited Grand Mufti Sheikh Abdul Latif Daryan, who was elected last month, to explain to him “how the army was resolving the crisis in Arsal and the North.”

It quoted him as saying that “the military is keen on the safety and security of our brethren in Arsal.”

“There is no siege on the town of Arsal and its residents,” the general said.

He also stressed that the military was exerting all efforts to guarantee the safety of the Lebanese in all regions without any discrimination.

Jihadists overran Arsal last month and engaged in deadly gunbattles with the army.

The militants from the al-Qaida-linked al-Nusra Front and the Islamic State group also took with them hostages from the army and the Internal Security Forces.

They later killed three of them and vowed to execute more captives if the authorities did not meet their demands.

The battles and the ensuing threats, sparked extra measures by the army in and around Arsal.

It blocked roads on the outskirts of Arsal used by the militants to get their supplies, and carried out raids, arresting hundreds of suspects, including militants who had attacked the army.

The biggest liar and tool in the region. You have no shame, honor or professionalism! No other military in the world would allow itself to be subservient to a militia...instead, you continue to take orders from them and harass Lebanese Sunnis, Syrians and Palestinians while you let the dogs of Iran roam free.

LOL, you are always right and factual

How by burning refugee tents?

The people in Arsal can't complain about being oppressed when they're harboring terrorists. If they dont like it, they can leave Lebanon and join the FSA-Nusra-ISIS jihadist terrorist caliphate.

There is no army in the world that would allow a militia to exist besides it, let alone be stronger than it. The Lebanese "army" doesn't even have the backbone to stop Hezb cars in checkpoints. Instead it decides to arrest "Syrian infiltrators", crush scooters and burn tents. How heroic.

As for Flame Thrower, your an uneducated child. You should be stripped of your citizenship and shipped back to Tehran with the rest of your ilk.

calling out the army when it does wrong is not insulting. It's called holding institutions accountable but of course you would know nothing of it as you support hizbollaat...7aret kul meen ido ilo that answers to no one...

even when the army is being killed and kidnapped it does not give the army the right to violate human rights.

it seems you are a close friend of Putin and in the know hahaha!

The genius had spoken