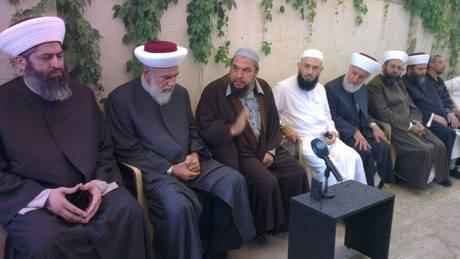 The Muslim Scholars Committee on Thursday called for a “transparent probe” into alleged abuse of Syrian refugees at encampments in the Bekaa border town of Arsal, saying Friday will be a “No to Slaughtering Arsal” day.

“We call for a transparent and impartial investigation into the abuse of innocents and torching of encampments in Arsal,” the MSC said in a statement issued after an “emergency meeting.”

“We urge the Army Command to put an end to violations and to address the situation with wisdom in order to thwart strife,” it added.

The Committee declared that activities will be organized Friday under the slogan "No to Slaughtering Arsal", in order to “foil strife which might spread to the entire country.”

The conferees also warned that they are considering to lodge complaints with the U.N. Human Rights Council and international humanitarian organizations.

They also cautioned that “some parties are seeking to stoke strife” and urged humanitarian groups to perform their “humanitarian duty towards our brothers the refugees.”

Earlier on Thursday, a suspect was killed and several others were injured when the army opened fire on them in Arsal for setting fire to tents in refugee encampments, according to an army statement.

The military also arrested scores of Syrians and Lebanese, including four gunmen belonging to al-Nusra Front, during the raids in Arsal, said the state-run National News Agency.

They are suspected of involvement in recent attacks on the army, it said.

The raids sparked a demonstration by Syrian refugees, who raised the Islamic State group flag near the Arsal municipal building.

Arsal has been the battlefront of the Lebanese army in its fight with jihadists since they crossed the border from Syria and overran the town in early August. The militants from al-Nusra Front and the IS kidnapped troops during their withdrawal.

Several soldiers and policemen remain in captivity while three have been executed.

Also Thursday, the army carried out raids on the residences of Syrian refugees in Tripoli's Abi Samra district.

It said in a communique that it arrested 20 suspects and seized arms, ammunition and military gear from their possession.

"the article is about Sunnis undermining your LAF." where is the article you are referring to, Sectarian despicable filth!?

southern, you are such a sick person, man. Go seek some professional help

I totally agree imvho. Religion is the opium of the masses.

I am always baffled by these so called Muslim scholars. They are supposed to be scholars who know a thing or two about Islam, right? How can they possibly side with heart eating head chopping butchers against the LAF. I mean I'm no Muslim but I keep getting reminded by my Muslim friends that Islam is a peaceful religion, isn't it? If so how can a scholar of a peaceful religion be so spiteful, hateful and shamelessly supportive of murderers?

Please someone explain this to me cause I don't understand anymore.

I have in fact listened to the Honourable Lebanese Mufti. He seemed like a wise man and we need wise men in this time of madness.

Can I just ask something because I honestly do not know?

Rogue scholars like these can they not be silenced by the higher Muslim council. I mean are they regulated in any way or you can just preach what you want even if it is hatred?

I believe that actions like these proposed by the so called scholars ie the no to slaughtering Arsal day are by nature very passive aggressive and remind me very much of the so called peaceful protests Asir and co did before it all went crazy. All they do is encourage anger and fuel sectarian tension, no?

Unfortunately Shah I see quite a lot of danger in their actions. Honestly it only needs a small number of frustrated people fuelled with anger to cause a civil war. It only took 5% of Lebanon's population to take the country to the abyss! I see a similar number simmering as we speak and aching for all out war

imvho; the only good Christians, are the Aounis. just ask the FT pack.

from the picture: first part is done, they are lined up against the wall. now can someone please tell me, why their hands are not tied behind their backs, nor are they kneeled with their heads toward the brick with army soldiers behind them just like their ISIS buddies do? oh, i forgot, the double standards. well let's hope the LAF makes the most of their captured syrian terrorists from arsal yesterday. do unto others as they do unto you, and a little bit worse. these guys are criminal terrorists who sought to kill lebanese and i hope they go through hell as long as lebanese innocents do.

No disrespect to any Sunni' s who are the main fabric of the Lebanese army but the Muslim scholars are putting limits into army movements and interrogations . How many wanted terrorists were caught yesterday ? How many weapons were siezed ? How do you expect to show a show of force to all these refugees who are walking time bombs and to all the terrorists in Lebanon ?