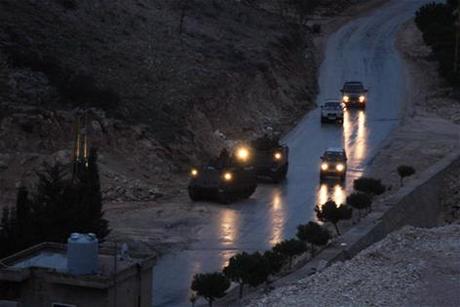 The Lebanese army clashed with jihadists trying to infiltrate Lebanese territories at dawn Monday, leaving many dead and injured among their ranks, Voice of Lebanon radio (93.3) reported.

The infiltration attempt was made on the outskirts of the northeastern border town of Arsal, which last month witnessed bloody clashes between the army and militants from al-Qaida-linked al-Nusra Front and the Islamic State group.

The jihadists took with them hostages from the military and police, and killed three of them.

The military has so far stopped several infiltration attempts after it blocked dirt roads near Arsal to stop the militants, who are taking refuge in the town's outskirts and on the porous Lebanese-Syrian border, from receiving supplies.

VDL also reported that militants, taking the Syrian border towns of Serghaya and Asal Alward as their base, are trying to smuggle arms to Lebanon.

The gunmen are led by a Palestinian identified as Hatem al-Hassan, the radio station said, adding that his deputy is Ahmed al-Rifai, a Syrian.

The armed groups are taking the weapons and ammunition to caves in the town of Maaraboun, which similar to Arsal lies in Baalbek district, to hand them over to Lebanese fighters, VDL stated.

Their intention is to spread chaos in Lebanon, it added.

The LAF could really use those newly purchased UH-2 Mr. ambassador Hale, can you please expedite?
Meanwhile, maybe the US led coalition can fly a sorti or two in support of our armed forces?

The US led coalition are not here for Lebanon, Syria or Iraq's interest, period. It's only a fantasy if you think that they are here to help us. They created Isis and probably encouraging them to enter Lebanon so the coalition would have have an excuse to bomb targets in lebanon.

So be it, let them bomb targets in Lebanon. Why are you worried?

why am i worried. how long have they been bombing Afghanistan for. You think we need that here to go on for how many decades. Let's see how many bombs will be dropped on innocent weddings by 'mistake' just like in Afghanistan. You many think i am being far fetched but you have to understand american involvement has nothing to do with Isis or for the good of people here, it is here to destroy plain and simple. Listen, i hated Saddam but i despised americans more for their attack on Iraq because i knew it would not help any Iraqi whatsoever.

when the syrian army was bombing terrorists in the no-man's-land around arsal all m14 cried and denounced a violation of sovereignty. now you want the US to come bomb them. i dont care what you think one way or another, but try to have some consistency in your BS.

@cityboy
Notice that I said "IN SUPPORT OF OUR ARMED FORCES".

You and others honed in on bombing and chose to ignore the context. I'm certain had it been Iran or syria's Assad doing the bombing you would have been ok with it. Double standards?

The USA's bombing in Iraq saved your beloved Iran's behind whether you admit it or not. When will you admit that the Shiites and Sunnis need to make peace with each other and adopt a philosophy other than hatred for each other? Only then will the Missle East experience calm.

You probaly cheered, when Israel bombed Lebanon too.

Your family s rice in the south in the 1982 is the witness to the lies coming from your mouth.

Many in the M14 get that good vibe feeling believing that uncle sam really likes them more than M8. Maybe they really believe Tom Cruise is one of the pilots in action.

me toooooo, hahaha! But please, CFTC (Guest) use another screen name so people don't get mixed up between us. Thank you

I was thinking the same, exactly the same @cityboy. I mean how can I not considering we are the same poster.

KSA has offered to help like last week. so perhaps Leb gov can ask them to wipe out these terrorist pockets once for all..

why you need them to wipe them out, all they have to do is stop supplying them weapons and money. The rest the syrian army can take care of.

KSA the key supplier of ISIS, wants to help Lebanon? Now that's a good one.

Why werent the 'Arabs' part of any coalition recently to stop Israeli massacre of palestinians in Gaza.

I was asking myself the same question @citymowaten! We always think the same and I am afraid people might start thinking we are the same person..

We have loads of armed and brainwashed people in Lebanon. ALL of them need to be disarmed. Its just a matter of which come first..

I see that all the M8 propagandists are having a pow-wow. Keep talking to yourselves boys. The "truths" and "facts" you spew are hilarious...

God bless the Lebanese Army! Down with the FSA-Nusra-ISIS jihadist terrorists!

You should be put in Roumieh! Seriously. You have no idea how people can read Through you.

go to Qom and we don't need to see through you, blablabla