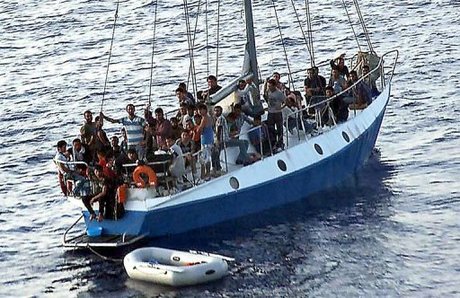 More than 3,000 migrants have died trying to cross the Mediterranean so far this year, more than double the previous peak in 2011, the International Organization for Migration said Monday.

Europe is by far the most dangerous destination for "irregular" migrants, the organization found in a report, with 3,072, or 75 percent, of the 4,077 registered migrant deaths worldwide since January happening in the Mediterranean.

In the 216-page report titled "Fatal Journeys: migrant fatalities across land and sea", IOM said more than 40,000 people had perished since 2000 while migrating -- 22,000 of them while trying to reach Europe.

"It's time to do more than count the number of victims," IOM chief William Lacy Swing said in a statement.

"It's time to engage the world to stop this violence against desperate migrants," added Swing, whose agency is not part of the United Nations but works closely with the world body.

The IOM report comes just weeks after one of the deadliest wrecks on record, when a ship carrying some 500 migrants, including Syrians, Palestinians and Egyptians and an estimated 100 children, sank.

The 11 known survivors have said the traffickers organizing their dangerous crossing from North Africa deliberately sank the vessel off Malta.

That catastrophe came less than a year after two shipwrecks near the Italian island of Lampedusa left more than 400 migrants dead, catapulting the issue into international headlines.

The grim tally of Mediterranean deaths during the first nine months of 2014 is already more than double the previous peak of 1,500 during the 2011 Arab Spring uprisings and nearly five times the prior peak of 630 in 2007, the Geneva-based organization said.

The soaring number of deaths "likely reflects a dramatic increase in the number of migrants trying to reach Europe," the report said.

More than 112,000 "irregular migrants" were detected by Italian authorities during the first eight months of this year -- nearly three times as many as in all of 2013, it said.

"Many are fleeing conflict, persecution and poverty," the report said, with people trying to escape Syria's bloody civil war and Eritreans fleeing their repressive regime and forced, decades-long conscription accounting for the largest groups arriving in Italy this year.

The deteriorating security situation in Libya, a transit country for many migrants, is also pushing up the numbers of people trying to make it to Europe by any means possible, it said.

Elsewhere in the world, more than 6,000 migrants perished along the U.S.-Mexican border between 1998 and 2013, meaning nearly 400 people died there annually over the 16-year-period.

Around 100 people have also died on average each year since 2000 in the seas bordering Australia, while thousands of others have succumbed in Africa's Sahara Desert and in the Indian Ocean.

IOM meanwhile warned that the actual numbers were likely far higher, pointing to the lack of detailed statistics and the fact that many migrants die in remote regions of the world and their deaths are never recorded.

"Some experts now believe that for every dead body discovered there are at least two others that are never recovered," the organization said.

It said it hoped that the report would shed some light on "a growing epidemic of crime against migrants."

Swing pointed out that one in seven people around the world are currently considered migrants, lamenting the "harsh response to migration in the developed world."

"Limited opportunities for safe and regular migration drive would-be migrants into the hands of smugglers, feeding an unscrupulous trade that threatens the lives of desperate people," he said.

"We need to put an end to this cycle," he said, insisting that "undocumented migrants are not criminals but human beings in need of protection and assistance, and deserving respect."