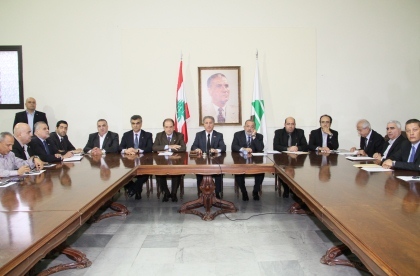 The Kataeb Party on Monday warned against approving draft laws under the slogan of “necessary legislation” amid the current presidential void, as it deplored a recent Syrian opposition statement accusing the Lebanese army of abuse against refugees.

The party “warns against any parliamentary course that might lead to legitimizing the presidential vacuum, which would violate the simplest rules of democracy, constitutional norms and the requirements of national coexistence,” Kataeb said in a statement issued after its politburo's weekly meeting.

The so-called “necessary legislation” is “only a suspicious move aimed at coping with the presidential void, in a manner that would turn the presidency into a marginal, expendable post,” Kataeb added.

It called on all political parties to unify efforts in order to “maintain the regular functioning of state institutions, starting by the election of a president as soon as possible.”

Rival parliamentary blocs have been unable to elect a successor to President Michel Suleiman, whose six-year term ended in May, over their differences on a compromise candidate.

The deadlock has also paralyzed parliament, which has failed to hold sessions over the boycott of several blocs that claimed the assembly should not legislate in the absence of a president.

However, many lawmakers have recently announced their intention to participate in a session under the slogan of “necessary legislation” and the parliament's bureau on Monday set a Wednesday date for a legislative session, whose agenda will be topped by the controversial public sector wage scale.

Separately, Kataeb condemned a recent statement issued by the Syrian opposition National Coalition, describing it as an “unwarranted attack on national sovereignty and the Lebanese army.”

It also warned that it could “sour the ties of solidarity and hospitality with the Syrian refugees,” urging “a clarification and a correction” from the SNC.

The Syrian opposition group had on Thursday accused the Lebanese army of “arresting around 200 people in a brutal manner” during raids on refugee encampments in the Bekaa border town of Arsal.

The army arrested on Thursday suspected terrorists during raids in Arsal and the northern city of Tripoli. One assailant was killed and several others were injured when the army opened fire on them in Arsal for setting fire to tents in refugee encampments, said the army.

Turning to the issue of the continued abduction of Lebanese troops and policemen at the hands of Syria-based jihadist groups, Kataeb voiced “grave concern” over the current approach towards the case, accusing some parties of attempting to polish the image of “the terrorist groups that are attacking the country and its people.”

The party urged the Lebanese to show “utmost responsibility,” calling on the government to speed up the negotiations and contacts with local and foreign parties and to move to “restore normalcy and reopen roads” blocked by the families of the captive troops.

It warned that road-blocking protests that have isolated many regions for several days “do not serve the cause at all.”

Arsal has been the battlefront of the Lebanese army in its fight with jihadists since they crossed the border from Syria and overran the town in early August. The militants from al-Nusra Front and the Islamic State kidnapped troops and policemen during their withdrawal.

Several security personnel remain in captivity while three have been executed.

Interesting to see the Kataeb slowly sliding away from the Saudi-Salafist axis.

No one wants Lebanon to default and no one should legislate with out a President being elected.
So the best course and elect a President then legislate to their heart content.
Gaegae said he is ready to withdraw his candidacy for a consensual candidate. If this is not a good offer, then have Aoun submit his candidacy and vote (may the better man win).