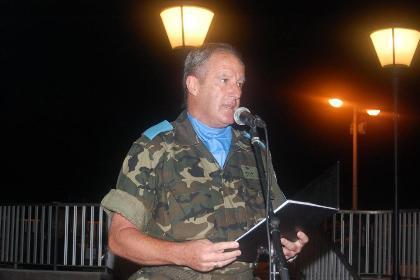 United Nations Interim Force in Lebanon Spokesperson Neeraj Singh on Wednesday denied a media report that he had warned Lebanese officials of “the possibility of ending UNIFIL’s mission if it was attacked again.”

“These remarks are totally baseless and I did not give such a statement to anyone,” Singh said, in remarks published in Arabic by state-run National News Agency.

“The future of the UNIFIL mission falls under the jurisdiction of the U.N. Security Council,” the force spokesman noted.

“The troop contribution to UNIFIL by any state is usually decided by the U.N. headquarters in New York and the state concerned and this decision does not fall under the jurisdiction of the general commander of UNIFIL, so neither he nor any third party can speak on behalf of the Security Council, the U.N. headquarters or the governments of the contributing countries,” Singh added.

As Safir newspaper reported on Wednesday that UNIFIL Commander Maj. Gen. Alberto Asarta has expressed his frustration over the “weak security measures” taken by the Lebanese security forces to protect U.N. peacekeepers.

Asarta allegedly warned the Lebanese officials of “the possibility of ending UNIFIL’s mission if it was attacked again, during its implementation of the tasks assigned to it by U.N. resolution 1701,” the daily quoted a western diplomat as saying.

“A major European country, which is a member of the U.N. Security Council and part of the peacekeeping force, has threatened to pressure the council to end UNIFIL’s mission if its contingent was attacked again,” said the supposed diplomat.

Sources told As Safir Asarta was informed that the army took the necessary measures to protect the UNIFIL force, unveiling that a meeting was held at the UNIFIL’s headquarters in the South between high ranking officers with the force, the director of operations in the army and representatives of the Internal Security Forces and General Security Directorate, with the aim of discussing the measures that were implemented.

In August, the U.N. Security Council renewed the force's mandate for another year.