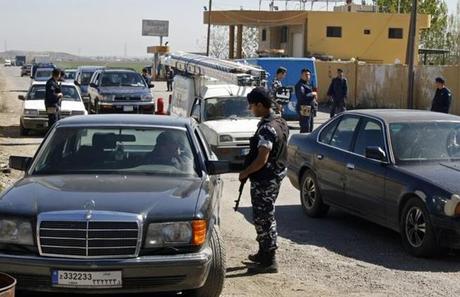 The Internal Security Forces on Wednesday arrested a Syrian man who had been purchasing weapons in Lebanon with the aim of smuggling them into Syria, which he intended to enter via Shebaa's mountains.

“A patrol from the Marjeyoun bureau apprehended the Syrian A. Kh. on charges of conducting suspicious activities in the Hasbaya region,” state-run National News Agency reported.

“Slogans supportive of al-Nusra Front and SMSes in which he communicated with individuals in Jordan were found on his mobile phone,” NNA said.

Investigators also determined that he had bought weapons with the aim of smuggling them into Syria “in order to form an armed group,” the agency added.

“He was supposed to enter Syria through the mountains of the town of Shebaa before moving to (Syria's) Beit Jinn and eventually Daraa,” it said.

The Military Court ordered that he be detained for further investigations.

According to media reports, Hizbullah has recently detected movements by armed groups from al-Nusra Front crossing Syria's occupied Golan Heights into the Lebanese border area of Shebaa, with Israel “turning a blind eye.”

The outskirts of the Bekaa border town of Brital had on Sunday witnessed fierce battles between Hizbullah and armed Syrian groups, during which a Hizbullah post was briefly seized by the militants.

destined for Syria... right. Every Syrian that tries to do such acts, immediate expulsion! Every Syrian gets 1 Chance. Hopefully we are able to catch them before they blow up something.