Slain Soldier Issa Buried in al-Rihaniyeh amid Anger and Grief 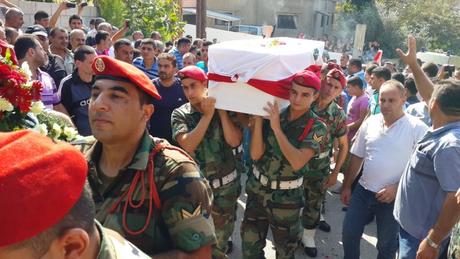 The Akkar town of al-Rihaniyeh on Thursday held a funeral for army soldier Milad Mohammed Issa, who was shot dead at dawn at the hands of unknown gunmen.

“Amid great anger and grief that engulfed the villages and towns of the Akkar district, the Army Command, the Issa family and residents of the town of al-Rihaniyeh and Akkar organized a funeral for the soldier Milad Mohammed Issa after the noon prayers,” the National News Agency said.

The soldier was then laid to rest at his family's cemetery in the town.

Earlier on Thursday, NNA and the army said Issa was killed and another soldier was injured at dawn when unknown assailants shot them in the northern Akkar district.

They said the gunmen, who were riding a motorcycle, opened fire at them at the junction of the town of al-Rihaniyeh around 5:15 am.

Issa was killed while Mohammed Fakhreddine Haidar was severely injured and taken to hospital.

Following the attack, the military carried out patrols in the area and erected checkpoints to find the suspects.

The shooting sparked anger among al-Rihaniyeh's residents, who on Thursday morning blocked the Qobayet-Halba highway near the town's road junction, NNA and the Traffic Management Center said.

The news agency added that the angry protesters called for the immediate arrest of the assailants and announced their support for the military.

The army has been facing rising assaults following the gunbattles between troops and Sunni extremists who overran the northeastern border town of Arsal in August.

Many Islamists in Lebanon accuse the army of backing Shiite Hizbullah, which has sent thousands of fighters to Syria to support the regime of President Bashar Assad against rebels seeking to topple him.

It is high time to let the LAF, and ONLY the LAF, take complete charge of wielding arms.

HA, a Shiite party, engaged with the Syrian regime against a predominantly Sunni Syrian uprising...
HA claimed it will never spill into Lebanon...
The Lebanese Sunnis were humiliated on that fateful 7th of May...
It is now a Shiite vs. Sunni fight that HA and Iranj started. Extremism begets extremism. The only solution, nay salvation, for Lebanon is in a secular approach to end this bloody sectarian fight. Stop with the silly questions, trying to deflect from the point not fooling anyone.

I was thinking the same thing cityboy, exactly the same. We both are shia extremists, we both have fake accounts, and we both don't want HA to give up its sectarian weapons. I just hope people don't get the wrong impression and think we are the same poster.

"What makes you think that the LAF wants HA to give up its arms" LOL. What makes you not think the LAF wants HA disarmed? You think the LAF enjoys being humiliated by a militia, its officers stopped at HA checkpoints and asked for ID's, the ISF beaten up by HA. Anyway, the army wishes are not the relevant issue here because it submits to the will of the government and the government supposedly is representative of the people. Have a referendum and see if the people want HA disarmed. My estimate is more than 70% want your sectarian hizb disarmed, disbanded, and its members and leadership jailed and held accountable for their crimes against Lebanon.

Eagle, I will challenge you any day about your assetion that 70 percent of Lebanese want HA to disarm. You might get 70percent if you took a poll on this site, i will give you that.

the LAF has not the right to think anything: they execute the orders of the Lebanese government.

Lf, what are you going on about, that we take turns and that i am the reasoned HA supporter. Contrary to what you may think, we don't act as a team on here. My opinions sometimes differ with FT, Mowaten, Roar etc. although granted it is seldom. In fact i learn lots from them, and i would probably learn from you too if you were to get off this broken record you and many others keep repeating over and over on here.

hizbushaitan is realizing it is loosing fast the public opinion, thus, cityboy, your comment makes no sense, go and check any hizbushaitan responsible and they will advise you properly about that: they do not deny it anymore as it is becoming general knowledge.

it is good that finally the shia public opinion is starting to wake up to realize that there is no salvation but through the Lebanese state.

cont. Lf, You repeat the samething every day. Every problem in Lebanon according to you is the result of HA. Really, Lebanon and problems through out the middle east go way beyond HA. Another thing, why would you keep repeating this rubbish about sunni vs Shia, you know that is the most simplistic form at looking at the events in lebanon and syria. It has nothing to do with religion or sect.

ok geha, if the LAF takes orders from the government and the government wants the army to work side by side with HA, what is your problem then, why not accept the government is working in your best interest, in this case working along with HA.

@cityboy: do tell us what you have learned from roar and flamethrower or 'mowaten' ya fake. Is it how to be expert at propaganda?

cityboy; don't be so sure about the fake support you see for your hizb among christians of the FPM. Their alliance with hezbollah, syria and iran is not out of conviction but purely out of their spite for the sunnis represented by Mustaqbal whom they see as a threat in terms of education, affluence, and depth. As a christian I can tell you with a high degree of certainty the vast majority of christians and specifically maronites do not want a shia militia protecting them or undermining state institutions.

excuses to justify takfiri extremism. if they wanted to emulate hezbollah they would go fight israel, not kill LAF soldiers.
those trying to compare HA to takfiris are either retarded or ill-intent hypocrites.

Indeed, there is no justification whatsoever for hizbollah to stay armed in lebanon. Lets put all our weight behind a well equipped army, invest in protecting our borders and keep away from regional conflict. This will allow lebanon to gain stability and economic prosperity.

RIP to this brave soldier. Its high time the government starts exterminating all these filthy jihadist terrorists.

They should definitely .... Starting with Shia terrorist filth first