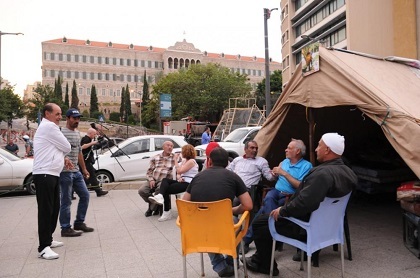 The transfer of the protest by the families of the so-called Arsal hostages from Dahr al-Baidar to downtown Beirut was deeply frowned on by the Lebanese authorities with one cabinet minister describing their move as “unacceptable.”

The minister, who was not identified, told As Safir daily in remarks published on Thursday that the protest of the relatives of the soldiers and policemen taken captive by jihadists in August is legal as long as they are not harming anyone.

But “what happened at Dahr al-Baidar should not be repeated somewhere else,” the minister said. “We should remain united.”

The troops and police were kidnapped by militants from al-Qaida-linked al-Nusra Front and the Islamic State group when they overran the northeastern border town of Arsal in August and engaged in bloody clashes with the army.

Their capture and the failure of the Lebanese authorities to secure their release sparked protests across Lebanon. The families of the hostages blocked main highways, including the Dahr al-Baidar road which links Mount Lebanon and Beirut with the eastern Bekaa Valley.

They are fearing that the extremists would kill their loved ones after they executed three of the hostages in August and September.

On Wednesday, the relatives moved their protest to Riad al-Solh square in downtown Beirut where the Grand Serail is located.

The minister told As Safir that negotiations aimed at securing the release of the captives are ongoing. “It is better to remain silent about them.”

He stressed that a Qatari mediator was still functioning.

Informed sources quoted the negotiator as saying that the main problem lied with the demands of the IS and not al-Nusra Front.

The sources confirmed to al-Akhbar newspaper that the mediator has not left Lebanon and that he could visit Arsal in the coming hours to propose to the representatives of the militants a new “negotiation mechanism.”

"families of the so-called Arsal hostages"

Poor choice of words naharnet... what are you implying exactly?

Families of police and army soldiers hostage have right and reason for their action. However, closing streets/ highways/ ect is only affecting the average Lebanese citizen already struggling to make an end meet! -------------Such act is Not affecting the rotten political arena of Lebanon.