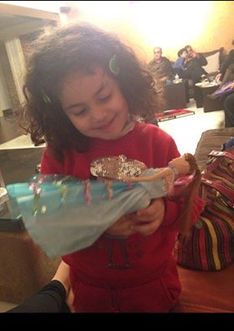 After her mysterious death shocked the public opinion, investigations revealed Thursday that the toddler girl Celine Rakan had been murdered more than a week ago at the hands of the family's Ethiopian maid, who was caught red-handed by the child while stealing house items.

“The Ethiopian domestic worker confessed to the Msaitbeh police station that she strangled to death the child Celine Rakan out of fear that she might be busted, after the toddler saw her stealing items from the house,” the Internal Security Forces said in a statement, ending a week of speculation.

Media reports said the maid turned off security cameras for an hour on the day of the crime and that investigators determined that Celine was killed during that hour.

The case caught public attention after the girl's father announced on Facebook that she died because of an “expired vaccine.”

She was laid to rest on October 3 in the Tyre District town of al-Shahabiyeh, her hometown.

“My dear Celine trusted that I will take her away from corruption, that's why she accepted to take the vaccine,” the father, who was planning to emigrate along with his family, wrote on his Facebook account.

His remarks had prompted the health ministry to quickly order the arrest of the physician, before the crime's circumstances were unveiled on Thursday.

You must be effing kidding me! Not only did the maid compound the theft with a perpetuation of the stereotype in Lebanon that all foreign domestic workers are thieves, but she murdered the little girl who saw her?! What an abominable story!
RIP little Celine...

No dude, don't jump to condemnations so quickly. Do you have kids? I do. And you cannot imagine how many times I had had to take a drastic decision because I believed it was ultimately in the best interest of my kids - including, for example, vaccinating them on doctors' advice - while myself not feeling very sure about if I'd done the right decision, and then only to have them fall ill (temporarily, but still) and me blaming myself in horror that I may have taken the wrong decision and that my kids are now paying for it with their health, if not like in this sad story with their lives. For all that you or I know at this stage, that father may have been sincerely beating himself up with guilt. Don't rush to persecute.

Anonyme,
No, I'm not one of those Michelle Bachmann types, and my kids got all their regular vaccines - like for polio, diphteria, tetanus et cetera - as soon as they were the right age. That one was for SARS, and there was this enormous scare and then debate here (we're in France) about the whole issue, and my son's mom (at the time I only had one kid), who I admit is far better informed on that issue than I am, was also against it and listed her reasons why; I basically had my son (and myself - I'd never give my kids something that I wouldn't take myself) vaccinated without informing her first. So quite on the contrary, I'm the one who rushed in panic and then worried at leisure, so to speak, when my son went down with flu-like symptoms which I didn't get. I felt like she was right and I had done a horrific thing.

It is unacceptable to attack the Doctors at every occasion.
Doctors are here to improve people's health.

FT
what kind of vaccine was it?

Poor little angel. our heart goes to her family...

I dont know the family. I judt heard about the crime on Tv. and still,untill now can't stop thinking about the little angel. How about her parents??? her father might not be a perfect person but surely he does not wish the death for his own daughter. Please stop blaming anyone. just pray for the soul of Celine.

While did the parent of celine put camara in the house,it means they do not trust the house maid or what? they put camara because may be the child was not okay because i see no need of puting camara in my house if i have a house maid because GOd see everything so they should be question about that.The hands of one of celine parent is not clean. People should also treat their domestic workers well because they are not out for slavery and you need them.why should this only happen to celine ask yourself this question, lebanese family are very lazy they should keep their house clean alone not taking foreignesr to do it for you for a litle token poor celine may your soul rest in peace.

there is sth soo fishy about this story! watch the video and u will b surprised!! 1) the kitchen table had food on it deffinately for more than a person which means there was someone with the maid 2) the maid cleans up the table after killing celine 3) the maid also changes her clothes 4) even has time to change the bes decoration in the room!! i have this story will not be covered up like everything in this country! rest in peace angel!