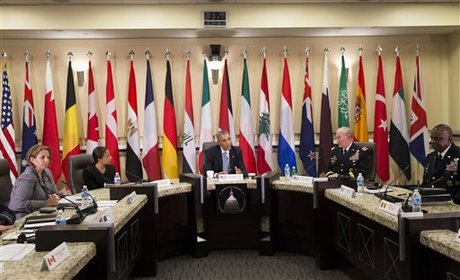 U.S. President Barack Obama vowed to continue his country's humanitarian assistance to Jordan, Lebanon and Turkey to help those countries bear the burden imposed by the large influx of Syrian refugees.

The three countries “are obviously bearing an extraordinary burden from the displaced persons not just recently over the last few months, but for several years now as a consequence of the civil war in Syria,” Obama said at the end of a meeting for military leaders from more than 20 partner nations in the coalition to degrade and destroy Islamic State of Iraq and the Levant (ISIL) in Washington.

“In addition to denying ISIL safe haven in Iraq and Syria, stopping foreign fighters, the intelligence gathering and airstrikes and ground campaigns that may be developed by the Iraqi security forces, we’re also going to have to pay attention to communications and how all the countries in the region begin to cooperate in rooting out this cancer (ISIL),” Obama told military chiefs.

There are already more than 1.5 million Syrian refugees in Lebanon, which has a population of just four million people.

Many are already living in informal tented settlements on farmland or empty fields in parts of the country.

The refugee influx has put massive pressure on the country's limited resources and contributed to rising tensions in a nation with a delicate sectarian balance and bitter memories from a 15-year civil war.

The conflict in Syria has regularly spilled over into Lebanon, with the border region often particularly volatile.

The Lebanese army is battling jihadists from Syria in northeastern Lebanon which has sparked a backlash against Syrian refugees.