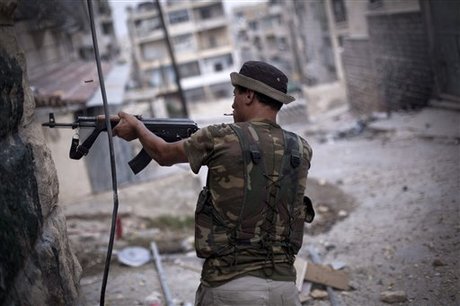 "An armed group opened fire on MP Waris al-Yunis's car as it traveled on the Hama-Salamiyah road at around 9:00 pm (18:00 GMT) on Tuesday evening, killing him instantly," the source told AFP.

Yunis was a representative from the coastal province of Tartus, a stronghold of support for President Bashar Assad, and a bastion of the Alawite minority sect to which the embattled leader belongs.

The militia is fighting alongside government troops against rebels in various parts of Syria, including Hama province.

Yunis is one of a number of members of Syria's parliament killed in the country's bloody conflict, which began in March 2011 with anti-government protests and has spiraled into a civil war.

More than 180,000 people have been killed since the uprising began, according to the Observatory.

now they'll celebrate by eating some sawda nayyeh i guess

I was thinking the same mowaten, exactly the same. After all, who else would do it right? We both have proof and satellite photos of the assassins entering the U.S. embassy in Damascus immediately after they committed the crime. We both also have proof that it was Israel who assassinated Hariri. We are so similar in thinking, it is sometimes scary. I just hope readers don't think we are the same poster.

You are not the same posters ...but in love with conspiracy theories which please children.

Whoever the unknown assassins of this "innocent" pro-regime militia commander are, mouwaten and southern do not like them, these are the types of assassins they fancy and approves of, Salim Ayyash, Mustafa Badreddine, Hussein Oneissi, Assad Sabra, Hassan Merhi... oh and yours truly

"militia commander"? lol how easy it is for you to put tags on people and legitimize murder.
He was an MP, an elected representative, not a combatant.

mouwaten, Kamal Jumblat, Camille Chamoun, Pierre Gemayel were MPs, elected representatives but according to your warped logic cannot be militia commanders. Get a shovel you can dig yourself the hole much easier than with your hands or maybe find an excavator tractor..
You decided who the assassins are on your own without evidence while I was quoting the article. Putting a tag on people to legitimize murder in your camp's specialty NBN's Sawsan Darwish it's poster child. Ibrahim Al Amine's a master of spotting traitors in Al Akhbar and go read his As-Safir accusations of Rafic Hariri in the run up to Feb 14 2005, even current saint Michel Aoun was one previous to 2005.

you mean like the HA elected MPs in the Lebanese parliament?

i decided who the assassins are? didnt get what you were trying to say there.
in any case i never defended or justified any of those assassinations you mentioned.

when you imply it was okay to kill this MP and you make the parallel with other assassinations, YOU are the one who just justified the previous assassinations. if you condone this killing, you cannot morally condemn other killings, especially if you say yourself they are similar situations.

He is our first guest in the newly opened Diplomatic quarters. Very well taken care off

Yes u should have a VIP section seems like they have started going after bigger fish.

"Yunis was a commander in the pro-regime National Defense Force militia."
Good Riddance!

you would think by the above reactions, he was a Lebanese MP. Their sorrow is strange considering first he is not lebanese, second he is a commander of a militia. I forgot they were distributing sweets when Lebanese MPs were assassinated(:

You forgot a little part in your quote, eagleyawn: "Rami Abdel Rahman, director of the Syrian Observatory for Human Rights monitoring group, said Yunis was..."

and who are you to discredit what he says? You quoted him as a reference a zillion times, but only when it suits your agenda.

lol at your BS, i dont need to discredit him because he doesnt have any credit to begin with. like you he's a paid propagandist, living thousands of kilometers away from syria and feeding the world media with a continuous flow of source-less dubious propaganda claims.

and no i never quoted him or took anything he said seriously, unless when he unwittingly contradicted himself or admitted things that go against the line he is paid to propagate.

He got what he deserved. He is a terrorist criminal and should be eliminated.

It is a fight for creating the Alawistan

dont take credit away from US-sponsored terrorists, after all they are dying for you.