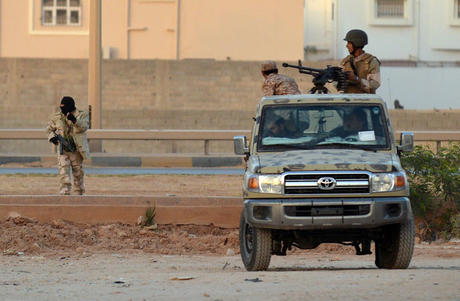 The United States joined Britain, France, Germany and Italy on Saturday in calling for an "immediate" end to long-running violence there between government forces and militias.

The countries also said in a joint statement that they were ready to use individual sanctions against hostile actors who "threaten the peace, stability or security of Libya or obstruct or undermine the political process."

Since a 2011 revolution that toppled Libya's longtime leader Moammar Gadhafi, interim authorities have failed to establish a regular army and had to rely on state-backed militias.

Former rebels who fought against Gadhafi have formed powerful militias and seized control of large parts of turmoil-gripped Libya over the past three years.

"The governments of France, Italy, Germany, the United Kingdom and the United States strongly condemn the ongoing violence in Libya and call for an immediate cessation of hostilities," their joint statement read.

"We condemn the crimes of Ansar al-Sharia entities, and the ongoing violence in communities across Libya, including Tripoli and its environs.

"Libya's hard-fought freedom is at risk if Libyan and international terrorist groups are allowed to use Libya as a safe haven."

On Wednesday, retired general Khalifa Haftar launched an operation against Islamist militias in the eastern city of Benghazi with the backing of army units and civilians who have taken up arms.

The European powers and the United States said they were "concerned" by the general's attacks.

"We consider that Libya's security challenges and the fight against terrorist organizations can only be sustainably addressed by regular armed forces under the control of a central authority which is accountable to a democratic and inclusive parliament," the statement added.

It said the powers "fully support" United Nations special representative Bernardino Leon, and "urge all parties to cooperate with his efforts."

"We agree that there is no military solution to the Libyan crisis," the statement added, saying the powers were "particularly dismayed" that parties had failed to respect calls for a ceasefire.

Calling for a united front from the international community, the powers said they "strongly encourage all partners to refrain from actions which might exacerbate current divisions in order to let Libyans address the current crisis within the framework of U.N.-facilitated talks."