Syria Says Shoots down Two of Three 'IS Warplanes' 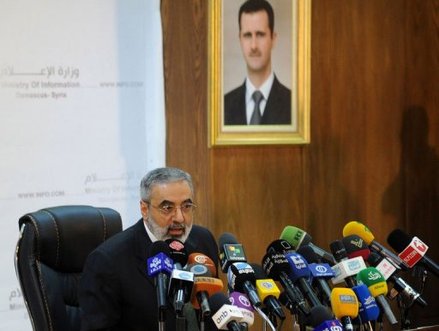 Syria's air force has destroyed two of three warplanes reportedly seized by fighters of the Islamic State group in the north of the country, Information Minister Omran al-Zohbi said.

The jihadists were reported to have seized the three planes, believed to be MiG-21 and MiG-23 jets, from Syrian military airports now under IS control in the northern provinces of Aleppo and Raqa.

The Syrian Observatory for Human Rights reported on Friday that jihadists were being trained by Saddam Hussein's former pilots to fly the jets at the military airport of Jarrah, east of the city of Aleppo.

"The terrorists were flying three old planes but our aircraft immediately took off and destroyed two of them as they were landing. The third plane was hidden" by the jihadists, Zohbi was quoted as saying by state news agency SANA Wednesday.

Zohbi downplayed the threat from the remaining plane, saying it was "unusable" and that Syrian forces would eventually track it down and destroy it.

The Observatory, a Britain-based monitoring group, had earlier said witnesses reported seeing the planes flying at a low altitude to avoid detection by radar after taking off from Jarrah.

Earlier, Zohbi said that Syria's armed forces, including its aircraft, have been providing military support to Kurdish fighters defending Kobane.

"The state with its military forces and planes has been providing military and logistical support, and has supplied ammunition and arms to the town," he said.

Although it is not part of the U.S.-led coalition fighting the IS, Damascus "will continue to give military aid to Kobane at the highest level", he added.

"From the outset of the battle, the state has not hesitated to play its military, political, social and humanitarian role" because the town is "Syrian territory and its residents are Syrians", said Zohbi.

Syrian Kurdish forces in Kobane on the border with Turkey have been holding out against the IS, which controls swathes of territory in northern and eastern Syria and neighboring Iraq, with the backing of U.S.-led air strikes.

Fierce clashes since September 16 have left more than 700 dead, according to monitors, and sent over 300,000 people into flight across the border in Turkey.

Haha, bad day for the savages if true.. but you know, they are more of a threat to themselves "flying" then anyone else.