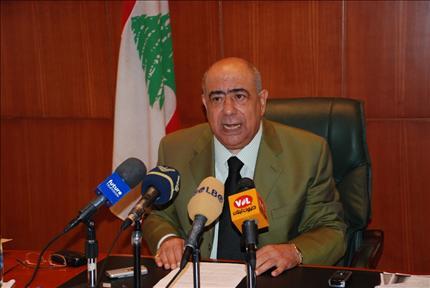 Zahle MP Nicolas Fattoush denied on Thursday that he assaulted a female Justice Palace office worker earlier this week, saying the accusations against him were aimed at targeting his patriotic stances.

“I raised my voice at her but I did not hit her,” Fattoush said during a press conference he held to brief the public opinion about his dispute with Manal Daou, an officer who processes complaints at the Baabda Justice Palace.

Fattoush claimed that he had a “simple argument” with Daou and that the media frenzy about it was directed at his “political stances, which seek to salvage” the country, mainly his submission of a draft-law on the extension of parliament's term.

Fattoush submitted in August the draft-law calling for an extension of two years and seven months.

“God forgive her,” he said about Daou.

The alleged assault has stirred a storm on social networking websites. Activists and citizens have vented their anger at Fattoush and expressed solidarity with Daou.

In his press conference, the lawmaker also slammed Justice Minister Ashraf Rifi for meeting with the woman on Tuesday.

Rifi snapped back later on Thursday, telling Fattoush that his "problem" is not with the justice minister, "but rather with the Lebanese public opinion, which has unanimously condemned what you did."

"The case has to do with a long history of disgraceful behavior, which the public opinion knows very well," the justice minister said.

Daou had recounted to Rifi what happened during the dispute, which according to several media reports ended after Fattoush “punched” her on the shoulder before he was stopped by other employees at the Justice Palace.

According to Daou, she directed Fattoush to where lawyers can submit their complaints and to where citizens can do so.

At that point, the MP placed a paper on her desk, she said.

“I was putting another complaint aside in order to take his complaint” when Fattoush said: “You are a woman who lacks morals.”

She said she was surprised and asked who he was. At that moment, his bodyguard interfered.

“I challenge any person to come forward to claim that I have done any violation during my career as a minister and lawmaker,” he said.

Daou attended the sit-in and thanked her colleagues for their compassion.

She confirmed that she filed a lawsuit against Fattoush, saying: “Let justice take its course.”

political stances?
which ones? those of stealing the Lebanese money? or the kassarat?

People like Fattoush don't need to raise their hands on anyone, they symbolize the core rot element of Lebanon's political system. What Lebanon's politicians don't seem to reconcile with is the fact that drop by drop, public sentiment is growing against them at an alarming rate. But knowing what these rotten people feel about themselves, I worry that they will react only when it's too late, when they'll start getting lunched in public. The writing is now bolder on the wall.

I have to agree with you on this one bro!

The likes of Fattouch harrass citizens
al.finique, I wish you stop harassing posters and contribute to the debates.

Year and years ago, I decided to watch the parliamentary session on TV just to see how it goes. Someone presented a law to lower the salaries of MPs and without any hesitation, Fattoush popped up very angrily and argued against the law so vigorously as if he is fighting for his life. That was the first time i saw Fattoush in action and that was enough for me to decide what kind of man he is.

His political stances? What does he represent other than his own financial interests?

What do a salad and a mafioso have in common? They both look like fattoush hahaha

MP Fattoush is a lawmaker and should not hide behind his parliamentary immunity. He says he did not hit her therefore he should voluntarily go to court and defend himself.
What would probably happen is Ms. Daou will probably settle for a very large sum of money (not less than $5m) that he can surely afford.

in any civilized country this despicable MP would have resigned after what he did to an employee... but we are in Lebanon and he has money destructing the country so according to politician standards he is a good politician...
TFEH 3a hel balad....

Did he slap Ms Daou or not? Is she suing him? That is what we need to know. If she drops the lawsuit, and he had really slapped her then she is foolish... because he will slap her again and again. Violence against women and children must sop in our society!

Fattoush has proven himself to be nothing more then a common 'thug'.

His post-incident statements are sufficient to have him condemned

Does anyone realize that this might not actually involve either politics or religion . At the very least it should not. Lets not use religion and politics as a sheild for bad behaviour .