Canada Attacks Follow al-Qaida, IS Instructions to a Tee 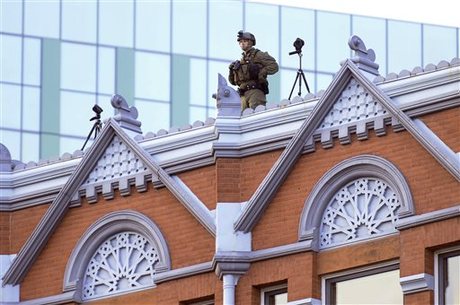 While they may not have officially been designated as jihadists, two suspected extremists who killed Canadian soldiers in shooting and driving rampages followed instructions issued by Al-Qaida and the Islamic State group to the letter.

The country was left reeling Wednesday after a gunman shot dead a soldier and stormed parliament in Ottawa, just two days after another suspected Islamist militant ran over two military personnel with his car in Quebec, killing one.

These deadly acts appear to follow what Al-Qaida has been preaching for years through articles or videos posted online, calling on recruits and volunteers to go it alone without specific orders or training.

Members of the group founded by Osama bin Laden had always been scattered across parts of Pakistan and Afghanistan among other nations and were the regular target of U.S. drone attacks, making it hard to group together all those who wanted to volunteer for jihad.

"Muslims in the West have to remember that they are perfectly placed to play an important and decisive part in the jihad against the Zionists and Crusaders... So what are you waiting for?" he asked in a video posted some time later.

Online jihadi magazines have published recipe upon recipe for homemade bomb-making -- "how to make one in your mother's kitchen" being one of them -- as well as lists of prime targets.

Any method goes: shooting or knifing them, planting homemade bombs, giving poison, or using a car or a truck as a weapon.

In Inspire's ninth edition in May 2012, Al-Qaida ideologue Abu Musab al-Suri wrote an article about individual jihad's targets -- the first being "main political figures who lead the campaign against the Muslims such as the heads of states, ministers, military and security leaders".

Next, "large strategic economic targets" and "military bases and barracks where the armies are concentrated, especially the American military bases in Europe".

"The mujahid, the member of the Resistance, practices individual jihad on his land, where he lives and resides, without the jihad costing him the hardship of travelling, migrating, and moving to where direct jihad is possible," he wrote.

In an eery echo, the Islamic State (IS) group also called on Muslims around the world last month to kill fellow citizens, particularly from countries that are part of an international coalition fighting the extremist organisation that controls swathes of territory in Syria and Iraq.

Experts have long warned against the danger of so-called "lone wolves" who are often so discreet before taking action that it is difficult to spot them.

And since the emergence of IS, candidates for jihad have been able to flock to territory under the organisation's control without too much difficulty, sending jitters in the West amid concerns they will come back and wage attacks on home soil.

In one such chilling example, Mehdi Nemmouche, a French national who spent more than a year fighting with Islamic extremists in Syria, is suspected of having killed four people at Brussels' Jewish Museum in May.

And in Canada, Michael Zehaf-Bibeau, the gunman who stormed parliament Wednesday before being shot down, was on a terror watch list.

"It's Inspire magazine that started by telling them: 'Here's what you have to do'," said Louis Caprioli, who led the fight against terrorism at France's domestic intelligence services from 1998 to 2004.

He pointed to another incident in London last year, when two Islamists ploughed their car into soldier Lee Rigby and knifed him to death.

"How to neutralize them? It's very difficult. We need appropriate legislation, preventative measures," he said.

"The two Canadians had been spotted, their passports were confiscated, but Canadian legislation did not allow for anything more.

"In these types of cases, the only solution is to detain and jail them preventively."

France is in the process of adopting a law that will slap a travel ban on anyone suspected of planning to wage jihad and bring in punishment for "lone wolves".

Other countries are also considering preventative measures, despite fears that citizen freedoms are being sacrificed in the name of national security.